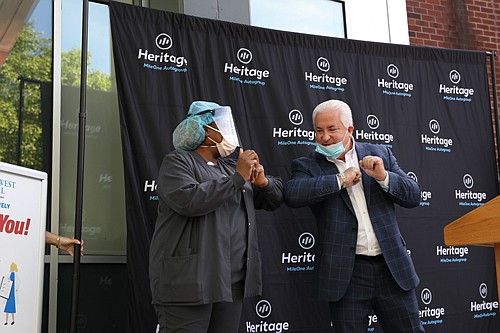 
One of the organization’s primary focuses is to put less fortunate families on the path to self-sufficiency through its sustainable car award program and re-entry training program.

According to its website, VFC has awarded more than 6,000 cars to low-income families since 1999. The vehicle giveaway on June 24, 2020 was a two-part celebration. The first ceremony was in the morning when Listra Williams, a certified nursing assistant at Northwest Hospital in Randallstown, was pleasantly surprised with a vehicle during her shift at work.

“A car impacts a family that is just unlike anything else so it really makes an enormous difference,” said Schwartz, also the founder of VFC. “Our statistics show that 75 percent of families that get a car from us within the first 12 months of car ownership increase their annual salary by $7,500.”

The partnership between Mile One and VFC dates back five years. Steve Fader, president and CEO of Mile One, reached out to Schwartz and his team with intentions of furthering the mission of facilitating car ownership in the Baltimore area.

“Vehicles are transformational— go to work, go to the doctor’s, go to the grocery store. When you don’t have a vehicle, your life becomes very difficult,” Fader said. “So we love this partnership and we look forward to continuing it for years.”

VFC and Mile One also partners in training formerly incarcerated individuals to become auto mechanics. In addition to donating dozens of vehicles to VFC, Mile One has contributed $75,000 this year to the nonprofit, according to Fader.

The afternoon ceremony was relatively brief, and included remarks from Mayor Bernard “Jack” Young, Schwartz, Fader and others.

“This is something that is very, very important for young people and families who don’t have cars,” Young said, acknowledging the philanthropic efforts of VFC and Mile One. “You can connect with your cars in anywhere you want to go, whether it’s work, whether it’s taking your kids to an amusement park, whether it’s to ride just for fun. This is really a wonderful, wonderful gesture by your (Fader’s) team.”

Brittaney Nelson, a young mother with twin toddlers, was one of the event’s special recipients. She had been without reliable transportation for well over a year, and had spent roughly $700 to $800 a month for Uber rides.

Nelson said the gift from VFC was the push and change needed to put her life back in order, adding that she will also have the time and opportunity to complete on-campus college courses with goals of obtaining a long-sought-after degree in business administration from the University of Maryland Global Campus.

“It means a lot to me, it means a lot to my kids. I’ll be able to spend a lot more time with them and a lot less time on public transportation,” said Nelson, a Prince George’s County resident who was given a 2010 Ford SE. “This gift of a vehicle means so much more than just transportation. It’s been my symbol of restoration. I now feel capable, I feel like everything I’ve had to place on the backburner is now possible and within my grasp.”

Aleeseea Jones, a full-time employee at Wal-Mart, is an incoming sophomore at Liberty University and resident of Garrett County - a rural region of the state with a very limited public transit system. Jones relied on her parents and grandparents to get around.

“I definitely appreciate an organization donating cars, because every business is out there to make money but they’re doing this kind gesture for low-income families,” said the 19-year-old who received a 2012 Nissan Versa. “Having this car and getting that sense of independence is really nice.”

After an executive citation was presented to VFC on behalf of Baltimore County Executive Johnny Olszewski, the recipients were told to stand by their vehicles as they were acknowledged by Schwartz.

Families were then told to step in their vehicles and start their engines as a celebratory gesture to conclude the afternoon.

For additional information about Vehicles for Change, a list of qualifications and criteria to receive a vehicle through VFC’s car award program or to donate a vehicle, visit: www.vehiclesforchange.org or call