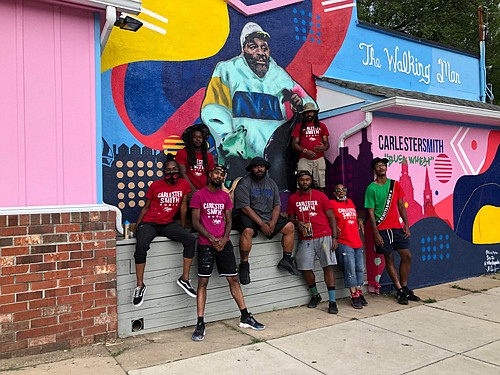 Annapolis legend, Carlester “Buckwheat” Smith, kept Annapolis clean for decades. However due to illness, Smith is no longer able to pick up trash on West Street but he is still very loved by the community. A team of artists painted a mural of his likeness at Pinkey’s West Street Liquors located at 1100 West Street, which was documented by photographers and a film crew. Two more murals will be painted. Smith’s fans contributed over $5,000 to honor Annapolis’ own “Walking Man” who was known to bring smiles to the faces of many people over the years. An online musical fundraiser allowed the dream to honor Smith to become a reality. Even though many murals have been popping up in public places all over Annapolis paying homage to Breonna Taylor and George Floyd, this particular artistic representation differs because Smith’s mural is not tied to police brutality. Courtesy Photo/Christian

It is unlikely to find a longtime Annapolitan who has never met, seen or heard of an Annapolis legend named Carlester “Buckwheat” Smith. According to sightings, which span decades, Smith stayed armed with a constant supply of plastic bags and a fast walk.

Smith had a disability which did not did stop him from faithfully appearing to pick up trash on West Street. The “Walking Man” didn’t just keep the city debris-free, he also inspired people to smile and feel upbeat. Although illness now prevents Smith from continuing his environmentally conscious tradition, fans can now view a representation of his cheerful face on a mural located at Pinkey’s West Street Liquors at 1100 West Street.

Even though many murals have been popping up in public places all over Annapolis—paying homage to individuals such as Breonna Taylor and George Floyd— this particular artistic representation differs because Smith’s mural is not tied to police brutality.

Kevin Lebling, who is also known by the stage name, “Hurricane Kevin,” performs blues and folk-oriented music, while singing and playing the guitar and harmonica. On June 22, 2020, the experienced musician hosted a virtual Facebook benefit concert for Smith called “Walk With Me.”

Lebling says he met Smith in the late seventies and described him as “a beautifully-spirited guy.” Musicians volunteered to perform, during the five-hour live streamed fundraiser. An overwhelming number of Smith’s fans thanked “The Walking Man” for his work and inspiration. Lebling estimated that thousands of supporters stepped up to contribute to Smith’s mural. Lebling added that a core group of six individuals led the charge to do something for Smith, after the question was posed online, about Smith’s whereabouts. 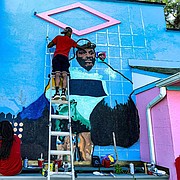 Comacell Brown, Jr. remembered seeing Carlester “Buckwheat” Smith, picking up trash, when he was a child. He along with other artists had the opportunity to lead the charge to celebrate the Annapolis icon by painting a mural, which was completed on July 12, 2020.

“We were able to raise over $5,000, just from that (online music) show, and people continued to contribute,” Lebling said, explaining that musicians volunteered to raise money to cover expenses related to creating the mural and producing the show. “One of the real main points of this project— and it is over and about Buckwheat— but it brings the community together. We are seeing all of these murals of people, who were murdered, but with this one, Carlester is still alive, and we’re celebrating him because of his smile, because of the way he did what Cal Ripken did. He showed up to work everyday. He brightened people’s lives, and I think he brought the community, which is a diverse community, I think he brings us all a little more together.”

Lebling added that although Smith’s in-person presence is missed, people will still have the joy of seeing his likeness on West Street.

Comacell Brown, Jr. is the mural’s lead artist who brought the vision to life, along with other artists. Brown, who is the owner of Cell Spitfire Paintings and Designs, LLC, came up with the art work which was approved by Smith’s family.

Brown explained that the creation of the mural was sparked after someone posting an inquiry on Facebook— had anyone seen Smith? A family member of eSmith responded that he was no longer able to get around, due to a back problems and failing health. A collective idea to do something to honor Smith emerged. Brown, also a teaching artist got to work.

“It (painting the mural) was important to me, because he (Smith) was a legend in my eyes for all of the work that he continuously did day in and day out in Annapolis,” Brown said. “And, he was also one of the rare people who could connect black and white people together, through his hard work, with no bias. You really saw that [while] painting the mural, and hearing the stories— I think that he was pivotal in Annapolis.”

Brown has been a part of six local mural projects. Over 75 people suggested that he should be the one to lead the mural project of Smith.

The artist said that Smith’s family reached out to him and said that they would be honored if he painted the mural.

“I believe the mural is very important for people who didn’t get a chance to say their goodbyes, being that he is not able to come out anymore,” Brown said. “It gives that same drive and happiness to see this mural of him, right on the same street where they were introduced to him...”

Funds are still being raised for two more murals and Smith’s care. For more information or updates or to make a donation, visit https://www.facebook.com/CarlesterSmithAnnapolis.