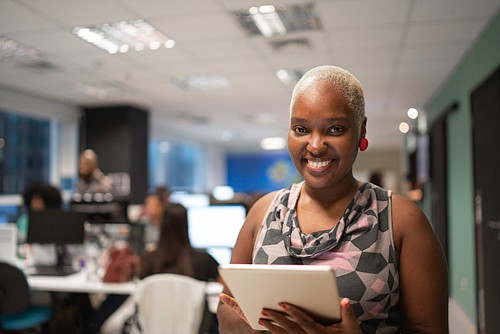 Given the federal government's extension of the PPP, Wells Fargo will reopen its PPP loan application process to eligible customers as soon as possible through a link in Business Online Banking. Photo Credit: iStock/NNPA

In April, Wells Fargo announced it would donate gross proceeds from the Paycheck Protection Plan to nonprofits working with small businesses.

This month, the bank has ramped up its efforts by unveiling the details of an

The goal is to help keep the doors of small businesses open, retain employees, and rebuild.

resiliency programs to small businesses, emphasizing those that are minority-owned businesses.

“We realized early on that small businesses were taking the brunt of what was happening with COVID-19 and the economic slowdown that occurred,” said Jenny Flores, Wells Fargo’s head of small business growth philanthropy. “We also noticed that diverse individuals were having a very negative impact, and with the data, it was coming to 41 percent or 450,000 Black-owned businesses closed when COVID hit. That is a disproportionate impact not only to the

entrepreneurs but also to the employees they have and the pocketbook.”

Of the loans made, 84 percent of those are for companies with less than ten

employees; 60 percent were for amounts of $25,000 or less; and, 90 percent of these applicants had $2 million or less in annual revenue.

Given the federal government’s extension of the PPP, Wells Fargo will reopen its PPP loan application process to eligible customers as soon as possible through a link in Business Online Banking, the bank noted in a news release.

The grants are aimed at empowering Black and African American-owned small businesses, which the National Bureau of Economic Research said are closing at nearly twice the rate of the

Among the first grantees are Expanding Black Business Credit Initiative (EBBC), which will support the launch of a Black Vision Fund to increase the flow of capital to Black-focused CDFIs for transformational work to close the racial wealth gap in African American communities.

The CDFIs will also receive capital for urgent deployment to impacted businesses in the Mid-Atlantic, Southeast, and Midwest.

“This is an extension of the commitment we had to diverse businesses,” Flores noted. “Small businesses need cash to open again, and we are putting $260 million for community development financial pocket lenders that have a track record of reaching diverse communities. We want them to be able to do new loans and to have grant money.”

Wells Fargo counts as one of the top PPP lenders in the country and has spent a lot of time understanding various strategies to assist small businesses,

“We have key members across the country, and I talk to entrepreneurs directly,” she said. “This reflects a very thoughtful approach, one that is based on really putting the customer right at the center, listening to what they need. This has potentially $1 billion of impact in a three-year period.

“When they get the loans and recycle that and then for every million CDFI loans out to small businesses, they can support 18 businesses and create 31 jobs.

“Hence, if you take the $250 million and work through it, it’s thousands of businesses we’re impacting in such a positive way. We’re really proud of the opportunity we have to collaborate with CDFIs and particularly those who are led by diverse entrepreneurs.”