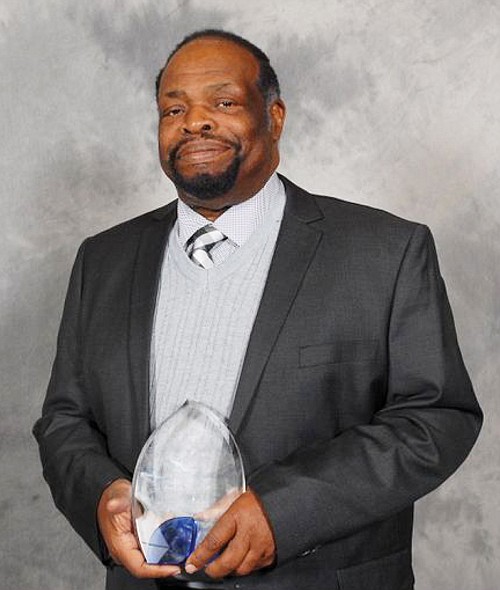 Christopher Crockett, a longtime Park Heights resident, has lived in the community for over 50 years. He talked about the legendary work of a man who dedicated his life to helping people in the area. That man’s name is George E. Mitchell.“George was really dedicated to uplifting the community,” said Crockett. “He wanted to see us get on our feet. He led by example by opening up different avenues for black men and black women. But his primary focal point were the kids. He was passionate about them.”Mitchell died on Tuesday, July 14, 2020 at the age of 65. His passing reportedly was the result of complications from surgery. A public viewing will take place Saturday, August 1, 2020 from 11 a.m. to 4 p.m. at

March Funeral Home, 4300 Wabash Ave. A Memorial Service will be held Sunday, August 2, 2020 from 2 p.m. to 5 p.m. at Langston Hughes Community, Business, and Resource Center, 5011 Arbutus Avenue. The service will be held outside on the field. Social distancing and masks are required.Mitchell served as president and CEO of the Langston Hughes Community, Business and Resource Center, which houses three libraries, a computer lab, and other resources to help children in the Park Heights community. He also served as president of Neighborhoods United, a unified group of Neighborhood Associations, which act as one body with definitive objectives for the achievement of physical, social, financial and health improvements in Park Heights. Crockett is Outreach Coordinator for Neighborhood United. He also serves as president of the SDKG

(Springhill, Derby Manor, Keyworth and Greenspring) Neighborhood Association. “I think George’s legacy is the way he lived,” said Crockett. “He cared about feeding people and the children. His love for the black community was outstanding. He was a worker for the rights of black people. If itwas right, he would fight for it.” Crockett said Mitchell’s mother Earles R. Mitchell, was also a fierce community advocate. “I have known George for a long time, but met his mother first,” said Crockett, “His mother also had strong roots in the community, and fought for what was right. “You could not buy George. You could not offer him money and think he would go against what he believed.

Because of George, the whole community is better because of what he stood for.” Pamela Curtis is the founder of Pushing the Vision Outreach Inc. a multicultural organization that caters to underserved communities. She also serves as Community Outreach Coordinator for Park Heights Renaissance, Inc. and is the president of the Park Circle Community Association. Curtis called Mitchell, ‘Uncle George.’“He always said this is our community and responsibility,” recalled Curtis. “Our seniors, our men, our youth, our responsibility. The way he promoted generational wealth was by first addressing our brokenness. He was all for diversity, but felt that before we connected with other people, we first needed to repair our brokenness. He fed hundreds, offered free Spanish classes, and gave away free furniture. He taught us about community relationships. The way that he gave was so amazing.” Mitchell was the recipient of numerous awards and honors. He was a 2019 Baltimore Times “Positive People Award” honoree. The awards are given to individuals who work to uplift and celebrate the human spirit and the power within all people to improve their quality of life and that of their community. Curtis, who was also honored, shared fond memories of her and Mitchell at the event, which was held November 13, 2019 at Horseshoe Casino. “We were each other’s cheerleader,” she said through tears. “When his name was called to receive his award, I yelled out ‘Go Uncle George!’ And when my name was called, he yelled out for me.” She added, “He was big on Black Media, and was honored to be honored by The Baltimore Times.

He often spoke about The Baltimore Times, and encouraged businesses to have the paper in their stores and on their stands.” Curtis said Mitchell will be greatly missed. “If he told you a story of hardship, it was not to be negative,” said Curtis. “He told stories of triumph. I am honored to have had the privilege to grow because of him. He put in a lot of work to help others. This is a tremendous loss.”Mitchell was born October 14, 1954 in Florence,South Carolina. After staying in Florence until a little after his first birthday, his mother moved to Baltimore,Maryland. He graduated from Lexington Terrace Elementary, Pimlico Jr. High, and Mergenthaler VocationalTechnical High School, respectively.He entered Morgan State University (formerly College) in 1972, and became a two-time MEAC wrestling champion, a member of the Morgan State Universityootball team and a member of Phi Beta Sigma Fraternity in which he was elected as the Associate EasternReginal Director. He graduated from Morgan in 1976.Mitchell is survived by sons George E. Mitchell Jr.,and Travis Mitchell, daughter, Nicole Neale, and granddaughter Sidney Rogers.