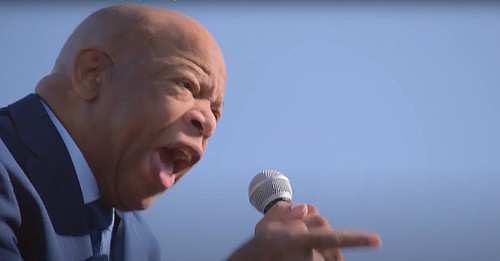 Described repeatedly as courageous, Lewis’ energy now is not very different from the energy on full display in the footage of the marches and Freedom Rides. Lewis lives and breathes the pursuit of freedom and all around him know it. To be in his orbit, one must hold that value if you are to be a part of his universe. (Photo: Still from film, John Lewis: Good Trouble)

John Lewis succumbed to pancreatic cancer, Friday, July 17, 2020. He was 80 years old. For many reasons, John Lewis’ death reverberates in my mind. No, not because of his tenure in the United States House of Representatives, representing Georgia’s 5th congressional district for 33 years.

No, not because he once served as the head of the Student Non violent Coordinating Committee (SNCC) as a young man. No, not because the cops beat, battered and bruised him and other freedom riders of numerous times to remember because of his nonviolent mantra and his ongoing involvement. No, not because he spoke at the historic March on Washington August 28, 1963.

No, not because he led marchers across the Edmund Pettus Bridge in Selma, Alabama. One of the marches went down in history as Bloody Sunday when Alabama police with guns pummeled and beat unarmed civil rights demonstrators. The first attack almost killed Lewis.

Yes, there was a select reason to remember John Lewis. The day was August 28,1963— the day of the March on Washington. Five members of the Big 6— A. Philip Randolph; Whitney M. Young Jr.; Martin Luther King Jr.; James Farmer; Roy Wilkins; and John Lewis— the men who put the March together, made a unique request that morning. Bayard Rustin served as a lead national organizer.

They asked John Lewis and other SNCC members that very morning to water down Lewis’s speech that he was going to give on the afternoon of August 28, 1963. The SNCC folks did. Still many claimed Lewis’s speech remained the most militant of the day.

Moyers and Company, an online journal commemorating the March’s 60th anniversary authored by Lauren Feeney, compared the Lewis original draft and the speech Lewis gave in August 2013. Look them up.

The original draft of his speech said, “In good conscience, we cannot support wholeheartedly the [Kennedy] administration’s civil rights bill, for it is too little and too late. There’s not one thing in the bill that will protect our people from police brutality.

“We won’t stop now. All of the forces of Eastland, Barnett, Wallace, and Thurmond won’t stop this revolution. The time will come when we will not confine ourmarching to Washington. We will march through the South, through the heart of Dixie, the way Sherman did. We shall pursue our own scorched earth policy and burn Jim Crow to the ground— nonviolently.

Dr. Morgan is an activist scholar, retired Coppin State University faculty member, and journalist. He can be reached at kmorgan2408@comcast.net.