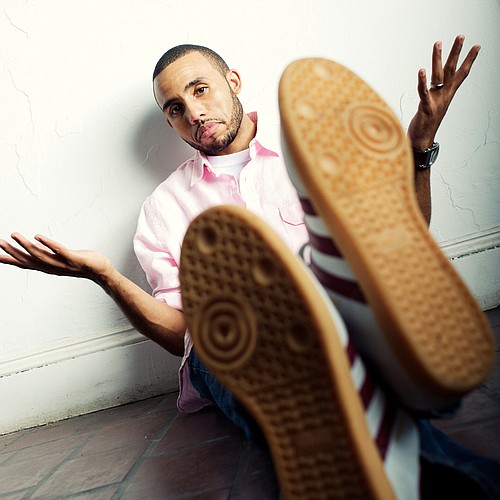 Unknown was inspired by Weems’ near-death experience due to an asthma attack following his performance in Philadelphia in 2017. For five minutes, he did not have a pulse or heartbeat. He awakened 16-hours later in the hospital with his patient bracelet labeled “Unknown.” This experience did not neces- sarily change his stand-up, but it definitely changed the intention in which he approaches it.

“I was always the ‘leave it all on the stage’ guy. Then on May 3, 2017, I literally left it all on stage,” said Weems. “Nothing about that day felt unique or ominous, so that truly let me know that any moment can be our last moment. Stand-up makes me feel alive, at least when it’s not killing me.”

Unknown, filmed in December 2018, will be marked as one of the last events where people could gather in public spaces and take part in the time honored tradition of stand-up comedy. Attendees included Maryland State’s Attorney Marilyn Mosby, Maryland State Delegate Nick Mosby, actress Sonja Sohn, R&B singer Brave Williams, FOX 45 Morning News anchor Patrice Harris and radio host Farajii Muhammad of WEAA-FM. The crowd was insane, and he is very thankful to Baltimore for making it an unforgettable night.

Weems shared, “ You’re gonna laugh and hopefully a lot. Expect to feel a renewed energy for life watching/listening to the show or whatever your dreams may be. ‘Cause I am living or proof that one day you’re here and the next you’re accruing hospital expenses in Philadelphia.”

Jason Weems is a comedic genius, actor and writer. In 2014, his online sketch series The Lunchtime Show premiered on Marlon Wayans’ comedy plat- form WhatTheFunny.com. He is a long-time favorite in the DMV who has headlined at premier comedy clubs and festivals nationally, including the exclusive “invitation only” Just for Laughs festival in Montreal. Film critics have also recognized Weems’ emotional range in his lead role in the comedic drama, Wits End.

This project is a family affair as Weems shares executive producer roles with his wife, Dionne Joyner-Weems, CEO of Audacity Group, a premier brand shop. After a 16-year career of building bold brands and promoting bright talent, she never questioned if Audacity could produce this stand out comedy special. It was a question of if the world was ready for all of this talent.

“This ain’t our first rodeo! Jason and I have been the Master P’s of our fate ever since meeting as students at Morgan State University. He and I share an unre- lenting work ethic and a stubborn belief that if we want something bad enough, we have the ability to make it happen,” said Joyner-Weems.

The entire Unknown production was Black-led, Black-owned by Black cre- atives in Baltimore. As a major Black city in America, the narrative of the tal- ent we produce is often downplayed and falsely represented by a world that has no idea of what they’re missing, she said.

Joyner-Weems added, “Jason and I represent what the city of Baltimore looks like on the offense. Audacity Group makes no apologies. We didn’t simply work with Black people to pro- duce a sold-out stand-up comedy special event. Audacity

Group worked with the brightest and most innovative creatives in Baltimore who just so happen to all be dope Black people.”

Unknown is the latest installment of Weems’ “Good Ass Jokes” pro- duction. It is Weems’ hope that folks really laugh and enjoy them- selves and forget about all of the un- certainty in the