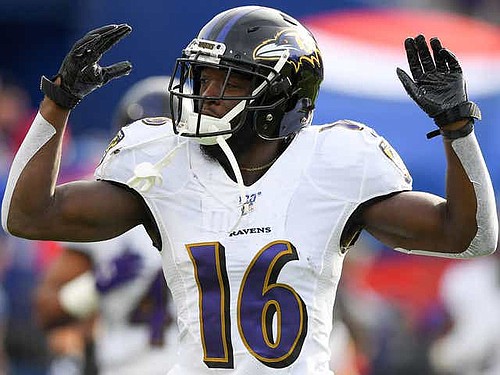 Primary return man De’Anthony Thomas became the first Ravens player to opt out of the 2020 NFL season because of the COVID-19 pandemic on Monday, July 27, 2020. USA Today Sports Images

Two Baltimore Ravens players have opted out of the 2020 NFL season be- cause of concerns due to Covid-19. Pri- mary return man De’Anthony Thomas became the first Ravens player when he opted out on Monday.

The offensive line suffered a hit on Tuesday when offensive tackle Andre Smith also opted out of the 2020 NFL season because of concerns regarding Covid-19. Other players will have until Monday, August 3 to opt out.

The Covid-19 pandemic dramatically altered the NFL landscape starting in the offseason. Teams had to employ virtual meetings instead of the typical organized team activities that take place during a normal offseason. Preseason games were canceled in hopes of giving teams a safer environment before the regular season.

As players began to report to training camp earlier this week, multiple players across the league elected to utilize their freedom to opt out of the season. Vet- eran players that had a credited season last year such as Smith and Thomas along with players that were drafted are eligible to receive a stipend while they opt out. The stipend comes by way of an agreement between the NFLPA and the NFL. Selected by the Kansas City Chiefs in the fifth round of the 2014 NFL Draft, Thomas spent six seasons in Kansas City and was released last October. The Ravens signed him in November and Thomas agreed to a one-year $935,000 deal with Baltimore in March.

Smith was the elder statesman in the Ravens offensive line room. Selected by the Cincinnati Bengals with the sixth overall pick in the 2009 NFL Draft, Smith spent seven seasons with the Ben- gals before second and third stints in Cincinnati separated by stops with the Minnesota Vikings (2016) and Arizona Cardinals (2018).

Last season, Smith started five games for the Bengals. Cincinnati released Smith in November. Baltimore brought Smith aboard in January to provide much needed depth along the offensive line.

The 12-year veteran signed a one-year, $1.07 million extension with the Ravens in February. The extension included $25,000 in guaranteed money. Losing Smith will hurt the Ravens from a depth perspective but Baltimore has an out- standing duo at starting offensive tackle. Left tackle Ronnie Stanley and right tackle Orlando Brown Jr. were both selected to the Pro Bowl last season.