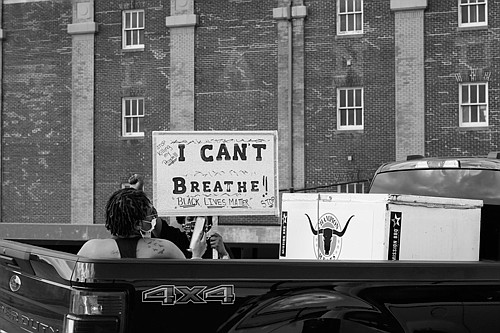 Count them—three executions in the last three months took place. The cops executed George Floyd in Minneapolis and Breonna Taylor in Louisville. Two right-wing vigilantes murdered Ahmaud Aubrey in Satilla Shores, Georgia. Who knows those killed and brutalized at the hands of the cops not counted as victims?

Malcolm X once said, “The chickens have come home to roost,” after the assassination of President Kohn F. Kennedy. Both nations, the United States and the Nation of Islam, ostracized him. They distorted his message but that is another story. Well, the chickens once again came home to roost in the way of a mass march and protest at City Hall this past Monday.

The murder of George Floyd at the hands of four white Minneapolis cops triggered the rally of an estimated several thousand people. The people attending were black, white, and many young. Demonstrators, waived signs in the air from black lives matter to white silence.

COVID-19 continues to ravage black folks disproportionately across the U.S. A horrific number of black essential, low-paid workers face life-changing decisions. Should they remain on the job, forced to return too many times to unsafe workplaces facing death. Countless numbers of us stand in unemployment lines.

Hundreds of thousands of us never have found jobs or have not met the levels of being part of the civilian workforce. Our seniors in nursing homes continue to die like swatted flies around a garbage can.

Remember the Freddie Gray killing. The people in those zip codes— 21215, 21216, and 21217 still wait for some modicum of improvement. Don’t forget the other zip codes where black folks live.

History tells us that black people’s economic and social gains accrued from protests, demonstrations, rallies and the like. We remember dynamic groups and

famous spokespersons. The groups and spokespersons rest on the shoulders of the people or the masses. Over 200,000 blacks fought for the North in the American Civil War, not counting those that walked off plantations. Who can forget the different black migrations or the black toilers that plowed the fields?

We need more of what took place at Baltimore City Hall with the voices that must be heard and the bodies that must be actively involved. Even though, what started out as peaceful, protests were hijacked by agitators creating chaos, breaking windows looting stores and burning buildings, we know the truth. We have known it for 400 years.