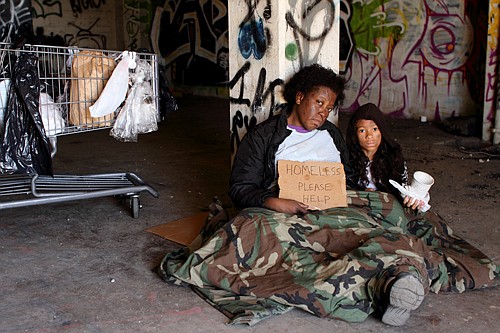 People experiencing homelessness are disproportionately people of color in the United States— 40 percent are black, despite being only 12 percent of the national population— and thus are already at greater risk of being targeted by police. NNPA

People experiencing homelessness in the United States— already at heightened risk and with fewer resources due to the pandemic— now face even greater challenges as a result of the both the violence sweeping many city streets and the curfews many are imposing in an effort to control. While people take to the streets across the country to protest police brutality and the killings of unarmed Black Americans, we urge lawmakers, police units, and neighbors to do more to provide people experiencing homelessness with shelter and safety.

Without homes to shelter in place, and with limited access to already-burdened emergency shelter, people experiencing homelessness are left to fend for themselves. The Centers on Disease Control (CDC) has issued guidance urging cities to house unsheltered people whenever possible, avoid sweeping encampments, and reconfigure shelters to conform to social distancing and sanitation guidelines. Unfortunately, compliance across the nation has been spotty at best, and people experiencing homeless have remained at extraordinary risk.

Now, various cities have implemented curfews as an effort to curb violence conducted outside of protests against police brutality. Unfortunately, curfews have created further challenges, as unsheltered people, already subject to laws criminalizing acts such as sleeping in public, are at risk of arrest for yet another “crime”—violating an order to stay inside after curfew when they have nowhere inside to go.

People experiencing homelessness are disproportionately people of color in the United States— 40 percent are black, despite only being 12 percent of the national population—and thus are already at greater risk of being targeted by police.

Increased police presence on the streets means increased risk of arrest and attacks during perceived curfew violations as well as preexisting laws that criminalize sleeping or that criminalize basic life sustaining activities.

“We call on cities across the country to follow the CDC guidance by housing people experiencing homelessness immediately—and to protect them from arrest, violence, and further trauma,” said Maria Foscarinis, founder and executive director of the Law Center.

In addition to putting our unhoused neighbors at greater risk, the curfew further

restricts access to basic services such as food, sanitation and bathrooms. The lack of services will further jeopardize the health and safety of homeless people, who are

already suffer from more chronic diseases due to stress and trauma, and who, if

infected, are twice as likely to die of COVID-19 than housed people.

The National Law Center on Homelessness & Poverty (the Law Center) is the only national organization dedicated solely to using the power of the law to prevent, and end homelessness. With the support of a large network of pro bono lawyers, we address the immediate and long-term needs of people who are homeless or at risk through outreach and training, advocacy, impact litigation, and public education.