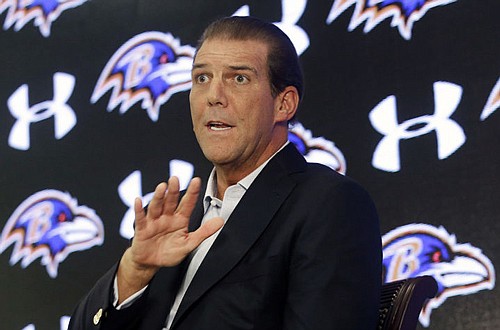 The Baltimore Ravens have consistently been one of the more progressive organizations in the NFL. In November 2002, Ozzie Newsome was named as the team’s general manager. Newsome was the first black man to hold the position in the NFL. With Steve Bisciotti as the owner, the Ravens continue to show support to the Baltimore community, the majority of which is black. Bisciotti’s latest message is possibly his strongest yet.

The Ravens owner released a message via the team’s website in support of Black Lives Matter and took a bold stand against the social injustices, police brutality, and systemic racism that exists today.

“Ravens Nation, like most of you I’m sure watching those videos shook you, and shook me to my core. It made me sick; and it made me angry,” Bisciotti said.

One of the videos Bisciotti was referring to was of George Floyd being murdered by former Minnesota police officer Derek Chauvin. Chauvin placed his knee on Floyd’s kneck for eight minutes and 46 seconds, resulting in Floyd’s death.

As the owner of the Ravens, Bisciotti has gotten the chance to develop close-knit relationships with many black players. He wants them to be able to express their concerns and have people actually listen.

“All they’re asking for is right now is to be heard. I want to ask you individually, Are you willing to listen? That’s all they want. And if you listen enough, will you learn to speak up? That’s the hardest thing for us. But it’s the first thing that they need…to just believe they have partners that want to listen.

“I’ve learned in my life more than anything, that anger comes from hurt. I see that anger. If we don’t stop and think about the hurt that has been caused nothing will ever change. These young men are hurting and they’re begging us to listen.”

Bisciotti said he got to sit in on virtual meetings with the players. He admitted that the conversations were uncomfortable for both he and the players. Seeing them being uncomfortable had a huge impact on Bisciotti. His fear of saying the wrong thing would have made it easy not to say anything but he refused to allow being quiet to be an option for him or the Ravens organization.

Now he is urging everyone to speak up and take a stand in addition to calling out those who don’t.

“To say ‘stick to sports’ to my players is the worst possible thing that you can feel and say. If my players both white and black don’t speak out about this injustice to their communities, then they’re sellouts or they’re hypocrites. If I don’t defend my players, then I’m the worst kind of hypocrite.

“I’ve spent 20 years loving watching them perform. Building relationships with these young men has meant more than success on the field. If I was them, I wouldn’t want to work for me if I’m scared to speak out or if I didn’t consider economic hurt because I don’t want to offend. I’m not going to do it and I hope the fans feel the same way.

“Black lives matter and I think for the vast majority of you all, you feel it and more importantly you live it by your actions. So, why is saying it, so hard? If you don’t understand it then ask the difficult questions.”Well said, Mr. Bisciotti.