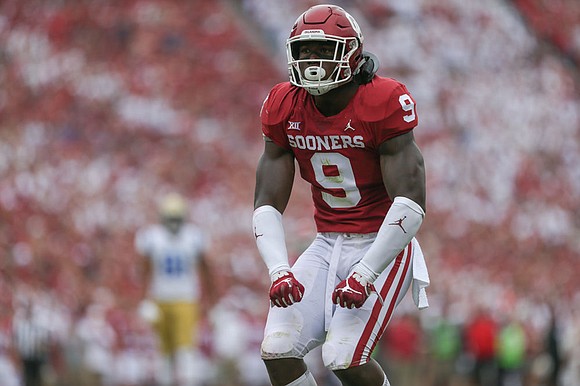 Oklahoma linebacker Kenneth Murray and LSU linebacker Patrick Queen would be instant starters for the Ravens. Both young men will likely be available when the Ravens make their pick in the first round. (Above) Kenneth Murray linebacker with the University of Oklahoma Sooners. Caitlyn Epes/OU Daily

The Baltimore Ravens will have their eyes on plenty of prospects at the NFL combine this week. Two particular prospects should warrant more attention at the combine.

Oklahoma linebacker Kenneth Murray and LSU linebacker Patrick Queen would be instant starters. They will likely be available when the Ravens make their pick in the first round, which is currently the No. 28 overall selection.

Baltimore lost long-term starting inside linebacker C. J. Mosley after he signed a free agent contract with the New York Jets. They stumbled upon a consistent player with the in season addition of L. J. Fort. However, linebackers Josh Bynes and Patrick Onwuasor are scheduled to become free agents.

Murray and Queen are the top options to be the next linebacker to be the heart of the defense. Queen has drawn comparisons to Mosley because of his outstanding sideline-to-sideline range in run defense along with his ability to cover tight ends and running backs. Two words best describe Queen— fast and physical.

Long-term ESPN NFL Draft Analyst Mel Kiper Jr. projected Queen to the Ravens in his latest mock draft. Kiper gave his explanation for the pick during his pre-combine conference call.

"I think Patrick Queen would be a great fit for them. He's a three-down guy. He had a phenomenal career, great tackler. You saw that in the game against Clemson. He kind of saved them in a couple of spots in that championship game," Kiper said.

Queen played in 12 of 15 games last season. He posted 85 tackles, 12 tackles for a loss to go along with three sacks and an interception. Queen also broke up two passes.

Murray is an outstanding player as well. He started 14 games with a total of 17 tackles for a loss and four sacks to go along with four pass breakups. Surprisingly,

Like Queen, Murray is adept at roaming from sideline-to-sideline to track down running backs. Murray is a solid option in coverage, which makes him a three-down player. One of the advantages the Ravens had with Mosley was being able to have him stay on the field in nickel and dime packages. They'd have that same advantage with Murray.

Defensive coordinator Don 'Wink' Martindale was given a significant bump in salary recently. Baltimore will need to add more playmakers to make Martindale's system run at peak performance levels. Keep an eye on Murray and Queen as the draft process rolls on.