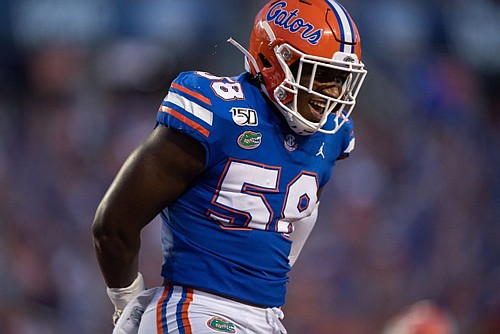 Florida State outside linebacker Jonathan Greenard may be a good fit for the Baltimore Ravens in 2020 NFL Draft. Gators.com

The Baltimore Ravens went to the combine in Indianapolis with a mission to meet and evaluate as many impact players as possible. One of the players they met with was edge rusher Jonathan Greenard from Florida.

That lines up with one of the positions that GM Eric DeCosta says the team will likely target at some point.

"We plan to draft at least one player on the defensive line or outside linebacker," DeCosta said via the team website.

Greenard transferred to Florida after sitting out the 2018 season due to a wrist injury. In 12 games as a Gator, Greenard posted nine sacks, two forced fumbles, and an interception last season. His rugged style matches what defensive coordinator Don 'Wink' Martindale wants from edge defenders.

While at Louisville, Greenard befriended Louisville alumni and former Ravens outside linebacker Elvis Dumervil. He happens to wear #58 just like Dumervil once did when he played for the Ravens. He has experience lining up along the defensive line or standing up as an outside linebacker as well.