Learn And Teach Your Children About Anger: If You Can Name It, You Can Tame It 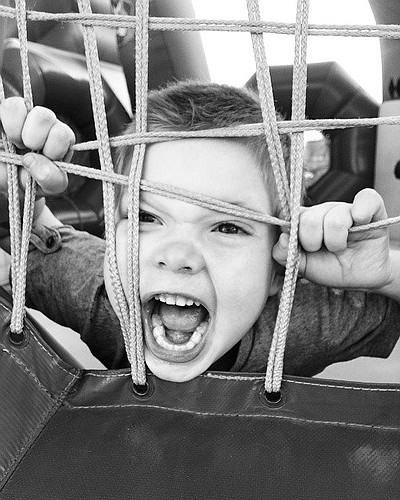 Learn And Teach Your Children About Anger: If You Can Name It, You Can Tame It Александра Туркина

Anger is an emotion and should not be ignored. Teaching children how to handle anger is better than telling them they are not angry and ignoring their hurts. Here is an example in preschool.

One toddler takes the other toddler’s toy that he was playing with and he starts crying and yelling, “give that back to me.” The teacher hears this and says, “Now, now you must learn to share. Stop crying and play with something else.” At this point the teacher teaches the toddler, to ignore his hurt and pain, to move on and get over it.

The older this toddler becomes he continues to learn to stuff and suppress his hurt and pain. Some of the behavioral symptoms can be: breaking things, causing property damage, disregard of others property, verbal and/or physical aggression, road rage, frequent fights, etc. As time passes, he has learned ways to handle his anger inappropriately, by possibly becoming a bully and/or a very angry boy who turns into a very angry man. As a teenager or adult, he can be diagnosed with intermittent explosive disorder (IED). Uncontrolled anger can lead to other disorders such as: attention deficit hyperactivity (ADHD), oppositional defiance (ODD), anxiety, depression, bipolar, along with some personality disorders.

As a result of anger, the individuals will experience some physical symptoms such as tightness, tension and pressure in the head or chest. After an anger episode, tiredness, tremors, racing thoughts, inability to focus or concentrate, poor performance in school or at work, easily frustrated, moody, irritability, sadness and possibly blind rage.

Learning to deal with the above signs and symptoms can help toddlers avoid a difficult life. Controlling or managing anger can help them avoid the pit falls later. If a toddler goes without learning how to control their anger it can lead to requiring medication and or therapeutic interventions for years to come.

The toddler must first recognize when someone does something to cause bad or inappropriate feelings. By addressing those negative feelings with a trusted guardian, parent or friend, they learn to verbalize their feelings and are in touch with their emotions rather than wondering about the physical response.

Doing this can help the toddler break down their feelings and look at what has taken place from an honest standpoint. Don’t ignore the negative feelings; talk about what he/she is feeling. Slow down their racing thoughts and action by having them taking slow deep breaths and communicate what is happening. By doing this, the toddler begins to heal and this will cause him/her to dig deep inside. The toddler will get a chance to hear and recognize what is happening and can learn ways to retell their story. They can begin to visualize the incident and figure out how they want things to turn out. Dealing with anger can easily be rectified earlier than later. Either way anger can be controlled it will just take longer in adults because they have developed entrenched behavioral patterns.

According to an article written in the Washington Post (2015), one in ten Americans have severe anger issues and access to guns— that’s almost 22 million Americans. If you stop and think about this; there are a lot of people who have not been taught that they are in charge of telling their own story and crafting the results they desire.

Here is a tip for children and adults. If you can name it, you can tame it. Feelings are noticed in your body before you verbalize them but once you say, “I’m angry” and notice the feelings associated with that emotion, they subside more readily than when they are not acknowledged. Knowing that you cannot change anyone but yourself you have to take charge and learn techniques to quiet the storm that is rage inside.

The choice is yours. Stop, think and breathe. This will give you an opportunity to think about your story. And remember, you are the star and the director of this production called life.

Dr. Linda is a licensed clinical social worker with over 30 years experience. She is a certified IBCT (Integrative

Behavior Couples’ Therapist) clinician. Linda along with her husband, Dr. M. Mike McNair founded “Pair of Docs Counseling.” They do nouthetic counseling. This is where the Word of God is seen as the leading authority in the counseling session. They do private couple’s counseling, seminars, conferences, coaching and premarital counseling. You can contact them through the Buckeye Review Publishing at 330-743-2250.