Hurryiet About it! New Legislation For Harriet Tubman 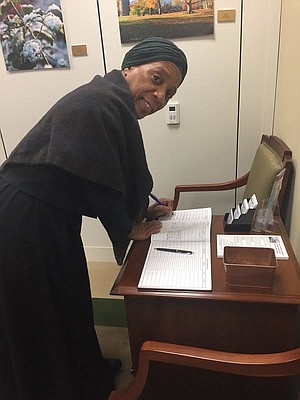 In commemoration of Harriet Tubman Day on March 10, internationally renowned actress, Gwendolyn Briley-Strand, brought Harriet Tubman to the Halls of Congress, and she brought some passengers with her. Local 1-2 of Utility Workers Union of America, AFL-CIO, Worcester County NAACP Branch, and HR 1242 Resilience Project were present to encourage Congress to introduce legislation to rename Virginia Inside Passage to the Harriet Tubman Waterway.

On September 24, 2016, Ms. Briley-Strand was given the honor of introducing the President of The United States Barack Obama, First Lady Michelle Obama, President George W. Bush, former First Lady Laura Bush, and all the dignitaries and celebrities at the Grand Opening of the African American Museum Of History And Culture in Washington DC.

Wherever there was a waterway, it was an escape route for the enslaved. The Virginia Inside Passage, along with several bays located in Virginia, Maryland and Delaware was the corridor for freedom along the Eastern Shore of Delmarva Peninsula and saw countless enslaved Africans take this route to emancipate themselves from the shackles of slavery. Harriet Tubman made 13 trips between her home in Dorchester County on the Delmarva Peninsula. The mouth of this waterway begins at the Chesapeake Bay, which was the entry point of many slave ships arriving from West Africa.

This legislation is designed to bring a wave of healing to the United States of America. In no way is this aimed to rewrite history, but to acknowledge the past, and move our country towards the future. This waterway will honor the enslaved who traverse this route, and the abolitionists and Native Americans who gave refuge to them along the way. There are no appropriations needed from Congress for the Harriet Tubman Waterway Act.