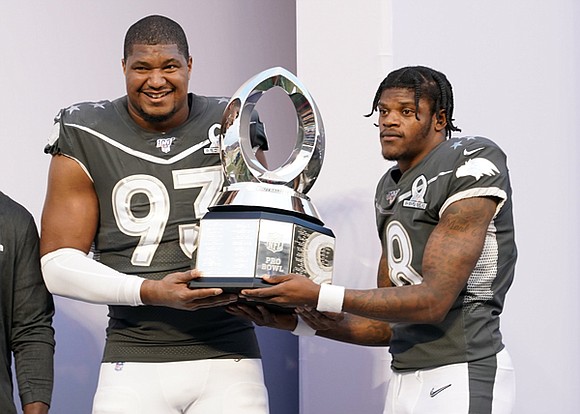 Calais Campbell has agreed to a two-year, $27 million contract extension with the Baltimore Ravens after a trade with the Jacksonville Jaguars for a fifth-round pick in the 2020 NFL Draft. (Above) The 2020 Pro Bowl Defensive MVP Calais Campbell and Offensive MVP Lamar Jackson holding the MVP trophy. Courtesy Photo/NFL.com

The Baltimore Ravens season ended with a humiliating 28-12 loss to the Tennessee Titans at M&T Bank Stadium in the divisional round of the playoffs. During the game, Titans running back Derrick Henry powered his way to 195 yards on 30 carries.

Ravens GM Eric DeCosta made it a point to add reinforcements to their run defense during the offseason. DeCosta agreed to send a fifth-round pick in the 2020 NFL Draft to the Jacksonville Jaguars in exchange for defensive lineman Calais Campbell. Campbell agrees to a two-year, $27 million extension with Baltimore after the trade.

Bringing Campbell aboard gives the Ravens one of the most disruptive interior players in the league. He was voted to this year's game after producing 6.5 sacks, 10 tackles for loss, and two forced fumbles.

Campbell will blow up plays in the backfield by getting to the quarterback and more importantly taking down running backs behind the line of scrimmage. While in Jacksonville, he wreaked havoc against the Titans. He was

especially devastating in their firstencounter when he posted three sacks in the Jaguars 20-7 win over Tennessee. The Ravens will look for that kind of production from Campbell if they have to face the Titans again in the playoffs.

Campbell will instantly be a locker room leader on a team that has been known for adding timely veteran defensive players over the years.

In another move to bolster their run defense, the Baltimore Ravens agreed to terms with former Los Angeles Rams defensive lineman Michael Brockers. He signed to a three-year, $30 million deal Monday night.

Brockers has been considered one of the best run defenders over the past few seasons as shown by his 54 or more tackles in each of the last three years.

Brockers will team with Campbell and Brandon Williams to form a wall that opposing running backs will have to deal with on game day. Count on running the ball being one of the hardest things to do against the Ravens defense this season.