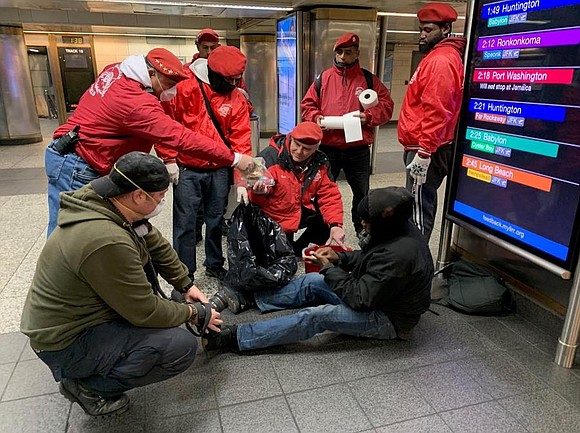 The Guardian Angels are stepping in to care for the city’s most vulnerable population — the homeless and emotionally disturbed, as New York City shutters over coronavirus concerns, reports the NY Post on Sunday

“Nobody is tending to the homeless and emotionally disturbed, a population where it could spread like wildfire,” Guardian Angel founder Curtis Sliwa told The Post.

The Angels have been out in shifts over the weekend in Penn Station and on the subways handing out care packages, stuffed with a sandwich, fruit snacks, hand wipes, water, and peanut butter crackers.

On Saturday alone, they helped more than 400 city homeless clean up — and gave out 382 care packages. The supplies were donated or purchased by the group.

About the Guardian Angels

In 1979, New York City was the crime capital of the United States. Along with many NYC natives, Curtis Sliwa grew tired of the subway threats, street fights and fearful nights. These dangers and lack of control were the impetus for Sliwa’s groundbreaking idea: The Guardian Angels. Conceived as a grassroots opportunity for individuals to rally with one another, The Guardian Angels quickly became an international phenomenon. Known by their signature red berets, the Angels’ persona stood for justice and the empowerment of individuals.

Today, The Guardian Angels have expanded into 14 countries and over 140 cities.