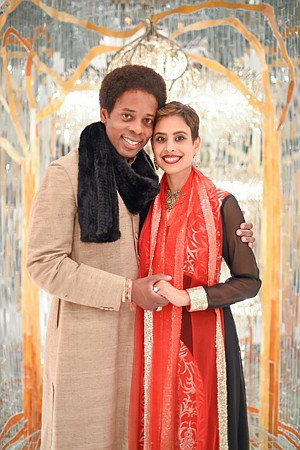 Guy E. Flynn and Nupur Parekh Flynn will receive the 2020 Sadie Award for their leadership in innovation and philanthropy from The Children’s Guild Alliance, a nonprofit organization serving children, families and child-serving organizations. Courtesy Photo

The Children’s Guild Alliance, a nonprofit organization serving children, families and child-serving organizations, will honor Guy E. Flynn and Nupur Parekh Flynn with the 2020 Sadie Award for their leadership in innovation and philanthropy.

The Sadie Award recognizes people who embody the organization’s spirit and vision of making the seemingly impossible possible.

Guy E. Flynn practices law at DLA Piper, one of the world’s largest law firms, where he serves as chairman of the firm’s Maryland real estate practice and partner-in-charge of the firm’s Baltimore office.

“The Sadie award is very special,” Guy Flynn told the Baltimore Times. “My wife and I are very philanthropic people, particularly when it comes to issues involving children. We think there’s a tremendous need around those issues and the well-being of children, and, in addition to the arts, we’ve focused our philanthropic efforts on children’s issues.”

Flynn noted that, initially, The Children’s Guild wasn’t a familiar organization to him and his wife. But, after researching the nonprofit, the couple was “blown away by the depth of the work they do and how long a period they’ve been in this space.”

“We really thought that this is a worthy organization and one that has done a lot of good work in the community, so we are thrilled,” Flynn said.

Recognized globally as a top lawyer, Guy Flynn serves as a trustee and board president of The Walters Art Museum. He also serves as a trustee and executive committee member of the Baltimore Community Foundation; a trustee of the Living Classrooms Foundation; a director of Maryland Legal Aid; a governor of The Center Club; and a member of the Baltimore City Ethics Board.

“Part of the legacy of DLA Piper, and I’ve spent my entire career at the firm, is the tremendous legacy of giving back,” Flynn said. “While being an extraordinary group of lawyers and civic leaders, we have to set an example of finding the time to practice law at the highest level but also taking our roles as leaders in society very seriously. We live, work, and play in the city in which the issues that we all confront exists. It would be folly not to address them head-on to the best of one’s capability.”

Flynn and his wife were raised in a similar fashion, which included the inculcation of philanthropy.

“I was raised by people who were professionals. My father was an immigrant from Jamaica, who came to the U.S. to attend medical school at Howard University,” Flynn said. “He became a successful radiologist in Howard County, and my mother was very successful in business. In both cases, they instilled the idea of excellence, the same characteristics at DLA Piper. They also demonstrated the need to give back and help people.

“My wife’s parents immigrated from India, and they raised her and her sister as very philanthropic people. My late father-in-law worked at Morgan State University, and he was very much a part of that circle of African American men and women who contributed to a lot of good civic works.

“My mother-in-law was a beautiful Indian woman who taught at Coppin State, Baltimore City Community College, and in prisons. She was an artist who enjoyed donating art to those less fortunate.

“My wife and I were raised the same way, and we view each other as amplifiers of this mission of ours where the idea is to do as much good for as many people as we can.”