Carla Joelle Brown is nearing completion of a new film that documents her grandparents’ journey in a RV around the country in the 1960s— during the heart of the civil rights movement when racism and discrimination made such travel nearly impossible for African Americans. Photo Credit: Sarah Nelson

Carla Joelle Brown is nearing completion of a new film that documents her grandparents’ journey in a RV around the country in the 1960s— during the heart of the civil rights movement when racism and discrimination made such travel nearly impossible for African Americans.

Growing up, Brown says she was riveted by stories from her grandparents, Baltimore residents Benjamin and Frances Graham, about their travels. She knew it was unusual for them to traverse the nation because they were African American.

When the Graham's started their journey, President Johnson had just signed the Voting Rights Act of 1965, and the Watts Riots had erupted in California.

“My grandparents were unintentional civil rights pioneers when they traveled across the country by RV,” said Brown, who received her bachelor's degree in 1998, and a master's in fine arts in 2001 from the University of Maryland, College Park. “This was a year after the signing of the Civil Rights Act [of 1964], which prohibited racial segregation in public accommodations, and the same week of the signing of the civil rights Voting Rights Act and eruption of the Watts riots.” 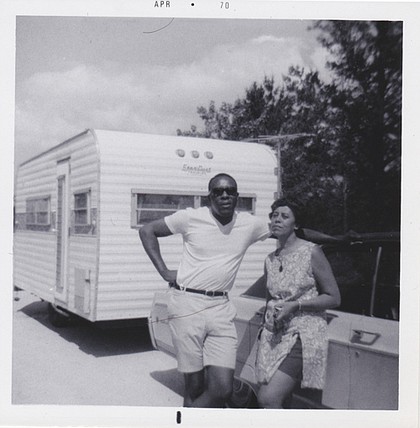 Benjamin and Frances Graham, in 1970.

To put the complexities involved in the journey into further perspective, Brown's grandparents had no prior camping experience.

They were accompanied by their three small children and embarked on their maiden voyage to the New York World's Fair in their newly purchased 17' Stardust RV Trailer.

Brown captures the adventure in the new documentary titled, “Everyone But Two: The Life, Love & Travel of Benjamin and Frances Graham.”

“My grandfather kept a travel log, and I decided that I wanted to retrace their steps,” Brown said, adding that she plans to complete the journey by going to the few places her grandparents didn't.

The film will examine how the RV lifestyle allowed her grandparents to break barriers and travel to predominantly white spaces of the outdoors in a racially divided America.

“My grandparents met a lot of friends who were white and they have managed to stay in touch over the years,” said Brown, who has worked for nearly 20 years in Baltimore, examining themes of gender, race, and family. “It was a counter-narrative to what you might think.”

In retracing her grandparents' journey, Brown noted that she wanted to see what it was about their travels that made the couple inseparable, and also discover what inspired them to throw caution to the wind as though they were the only two people in the world.

“Most importantly, I wanted to truly understand how the simple act of physically being in the predominantly white spaces of the outdoors broke barriers in a racially divided America,” she said.

Today, the notion of African Americans traveling across the country in an RV remains unusual, Brown said.

“I want people to take away from this film that there are people out there that look like me, people of color, and see themselves out there doing this,” she said. “There is so much out there in this country to see, and we're paying tax dollars for it. There are some African Americans traveling by RV, but you really have to be in the right place at the right time to witness it. And in general, I don't see that many people of color exploring the outdoors.”

To view the trailer for Brown’s documentary, visit: www.everyonebuttwo.com.