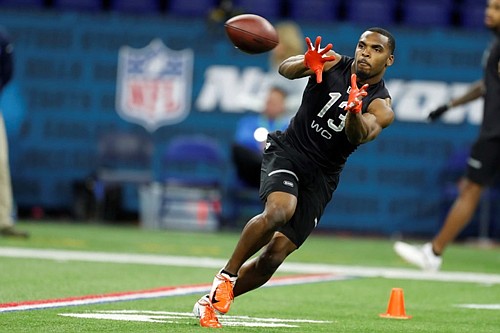 Former Texas wideout Devin Duvernay was drafted by the Baltimore Ravens in the fifth round of the 2020 NFL Draft. Ravens General Manager Eric DeCosta says Duvernay’s style of play somewhat reminds him of Steve Smith Sr. (Above) Duvernay at the 2020 NFL Scouting Combine. Courtesy Photo/NFL.com

Ravens General Manager Eric DeCosta is fired up about adding Duvernay to the team. He says Duvernay is a player that somewhat reminds him of Steve Smith Sr.

“He’s a tough guy. He reminds me of a few guys that we’ve had here in Baltimore, and I’ll reference guys like Anquan [Boldin], Derrick Mason and of course Steve Smith [Sr.] Those guys all had a competitive spirit about them that made them really stand out,” DeCosta said after selecting Duvernay on Friday. “I don’t think Devin is the biggest guy by any stretch, but he’s very tough, very physical, catches the ball really well, and he’s really tough with the football. So, I like those competitive guys who don’t go down, and he kind of has that style to him. He’s almost like a running back with the football.”

Duvernay consistently made catches across the middle of the field. Duvernay’s stocky 5-foot-10 and 200 pounds frame caused would be, tacklers to bounce off him, as he runs for yards after the catch. He has a violent style of play that definitely elicits comparison to Smith.

The comparison is music to Duvernay’s ears. Smith is a player that Duvernay looked up to before getting to the NFL.

“It means a lot. Those were some great players. I grew up watching Steve Smith Sr. I loved his game. He’s somebody I loved to watch and wanted to play like with that chip on his shoulder. It means a lot to get a comparison like that. I just have to keep working and get better. Maybe I can be like him one day,” Duvernay said.

The chip on Duvernay’s shoulder is now enhanced after falling to the fifth round of the 2020 draft. He felt he was one of the best receivers in the draft.

Duvernay’s number proves it. He led the country with 106 receptions for 1,341 yards and nine touchdowns over 13 games.

It’s already clear that Duvernay fits the Ravens from an on the field perspective. After hearing Harbaugh comment about Duvernay after the draft, it looks like he’ll fit their blue-collar approach to football as well.

“I got him on the call and he was all business,” Harbaugh said Saturday during ESPN’s draft broadcast. “He was like ‘c’mon, man let’s go to work. When can I get my playbook?’ I think he feels like he’s got a lot to prove so we like those kinds of guys here and they’re going to compliment us very well.”