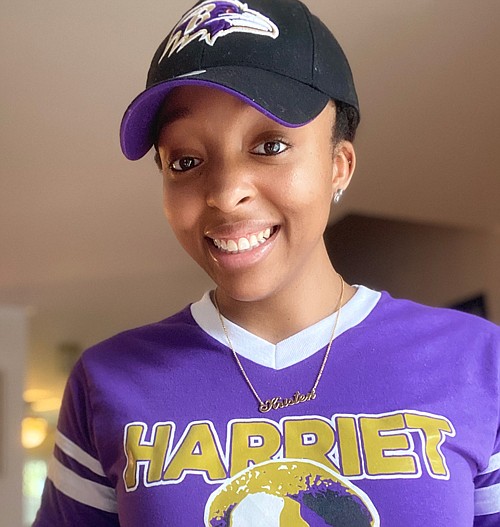 One hundred and seventy-one years ago, Harriet Tubman escaped to freedom in the North to become the most famous conductor on the Underground Railroad. Leading hundreds of family members and other slaves up the Eastern Shore of Maryland and into Delaware, Tubman risked her life and is universally known as one of the world's foremost abolitionist.

The history of Tubman isn't lost on Baltimore resident Kristen Miller. She sported a Baltimore Ravens Jersey with the name and photo of Tubman on the front during the Women's Empowerment Draft that debuted on the NFL Network earlier this week.

The Women's Empowerment Draft, a collaboration between the NFL Network and a group of Alfred University students dubbed, Art Force 5 (AF5), highlights the lives of 32 historically significant and iconic women who have contributed to the women's rights movement in the United States. Since there are 32 NFL teams, which was the number of icons chosen.

AF5 students use art to inspire discussion on topics of equality and social justice.

Founded by Alfred University and funded by the State University of New York, the program is nationally recognized with students creating non-violence workshops and impactful community art projects across the country.

The event featured at least a dozen Alfred University students living around the country in addition to about 20 more students, like Miller, from U.S. colleges and universities that are part of the initiative.

"It's truly an honor to be in such a position to have this platform to bring light to such powerful women," said Miller, who attended Baltimore City College High School.

Miller pursued higher education at Ithaca College located in New York, where she received a Bachelor of Science degree in Clinical Exercise Science. She is currently pursuing a Master's degree as a non-traditional student from Gonzaga University in Spokane, Washington.

"I was privileged with having a wonderful community. I grew up in Baltimore City, and my community really played a big part in my life," Miller said. "It takes a village to raise a child, and my community played the part. I've seen so many powerful women taking charge and not letting anyone, not even myself, prevent me from achieving greatness, and I've carried that with me."

The NFL and the 19th Amendment are both celebrating 100th anniversaries in 2020, and with an estimated 50 percent of American women reportedly football fans, the timing of the draft is perfect, said Adeye Jean Baptiste, a student at Alfred University.

Jean Baptiste co-hosted the Women's Empowerment Draft, which counts as an online city-by-city selection of 32 significant and iconic women pioneers in American history.

The draft honors the centennial of the 19th Amendment, which granted women the right to vote.

Thirty-two students from colleges and universities across the U.S. were featured wearing an NFL-style jersey that portraits and highlights a historical woman from their region or city.

New York City native Shirley Chisolm, the first African American woman to be elected to the U.S. Congress, was among the others honored. Chisolm appeared on a jersey highlighted with the colors of the New York Jets.

During the program, each student described the life and contributions of the woman featured on their jersey.

Alfred University alumnus and NFL Creative Director, Trent Cooper, produced the segments for the NFL Network, which posted coverage on their Facebook, Instagram, and Twitter pages.

"Bringing these two together in this way, through visual arts, raises awareness for equality on a national scale while also providing students like myself an opportunity to express our creativity," Jean Baptiste said.

Miller said she was inspired by her inclusion in the NFL Network/AF5 Women's Empowerment Draft.

"Being a woman and being able to share something about myself and women around me is amazing," said Miller. "To work on a project with 31 other women from various backgrounds, and to have a seat at the table has left me saying, 'wow.'"