UMB, Arabbers, Local Businesses Bring Food To Those Most In Need 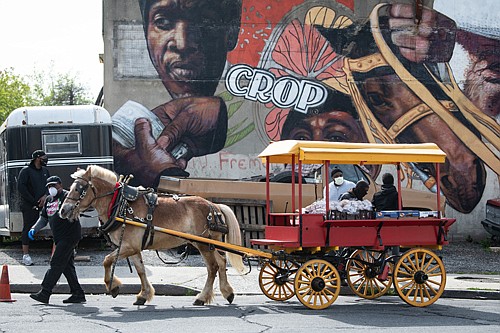 Arabbers are street vendors who sell fruits and vegetables from horse-drawn carts; and officials said it’s those carts that made it possible for UMB to deliver the donation from Holly Poultry to residents.

"We knew that there was a need in the Southwest Baltimore communities. The Office of Community Engagement is committed to UMB's partnership with the southwest Baltimore neighborhoods, so when United Way connected with Holly's Poultry about giving us a donation it was the perfect opportunity to collaborate with the southwest Baltimore neighborhoods to ensure that community members had access to food and other resources," said Madison Haas, Economic Inclusion Coordinator at UMB's Office of Community Engagement. "Giving out this generous frozen chicken donation was a great way to do that."

The chicken the arabbers handed out helped to feed approximately 900 families in the area, and residents said they're more than grateful.

"This neighborhood, especially our older people, grew up with having them (arabbers) come out to the neighborhood, so this is marvelous," said Sonia Eaddy, a resident, told WBAL-TV.

"It's a blessing because so many communities are being forgotten, nobody is coming. This is a big help for our seniors and residents in rental communities," another resident, Paulette Carroll said.Local business Neopol Savory Smokery was able to store the large donation in its large commercial freezer. UMB hopes to repeat the effort.

Local residents also said they hope the effort is repeated because it's a much-needed service, especially now.

"UMB can only be as good as it's community. The Office of Community Engagement is committed to having a positive relationship with Southwest Baltimore, where we can share resources and ideas with each other," Haas said.

"When COVID-19 hit, we knew it would be crucial to utilize university resources to ensure our community members had everything they needed. Giving out this Holly's Poultry chicken donation was one way to meet that need."