Virtual Mini May Concert Series May 23 & May 30 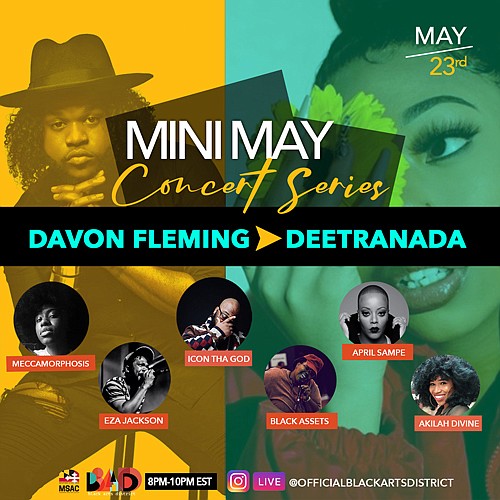 Virtual Mini May Concert Series May 23 & May 30 Courtesy Photo

Due to the COVID-19 crisis many local black Baltimore creatives have lost thousands of dollars in canceled gigs, according to Brion Gill of the Black Arts District.

In addition to teaming up with Baltimore Office of Promotion and the Arts (BOPA) and Baltimore Creatives Acceleration Network (BCAN) to co-organize the Baltimore Artist Emergency Relief Fund, the Black Arts District also decided to host online programming in order to activate artists during this time and provide a fee for service to supplement lost revenue, Gill noted in a news release.

In 2019, Maryland Secretary of Commerce Kelly M. Schulz announced the designation of new Arts and Entertainment (A&E) Districts in Maryland, which included the area along the Pennsylvania Avenue corridor in Baltimore. The Districts offer tax-related incentives to help attract artists, arts organizations, and other creative enterprises to these areas, and are aimed at developing and promoting community involvement, tourism, and revitalization. A&E District designations last for 10 years.

“Maryland’s Arts and Entertainment Districts serve an important role in revitalizing communities across the state,” Secretary Schulz said at the time. “This designation helps attract artists and creative businesses and gives counties and municipalities the ability to develop unique arts experiences that engage residents and attract visitors. I look forward to seeing how these districts utilize the designations for community and economic revitalization.”

The district's application was spurred from a community-led revitalization effort that brought together several organizations looking to the corridor’s storied past as a hub of social, economic, and arts activity for Baltimore’s black community.

In the area’s heyday, performance venues such as the Royal and Metropolitan theaters and social venues such as the Arch Social Club, Bamboo Lounge, Club Casino, and Club Tijuana hosted a who’s who of black entertainers, and black-owned businesses provided a stable community anchor and locus of commerce on Baltimore’s west side.

“The Black Arts District believes that in times of darkness, the artist becomes essential. While documenting the times, they also help to restore hope,” Gill said in the release.