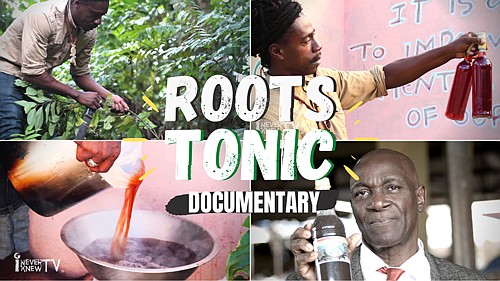 “Pharmaceuticals treat you, but the roots and the herbs cure you.” These are the words of Corey ‘Ras Stimulant’ Davis. The Vegan Chef’s words set the stage for Roots Tonic: Jamaica’s Cure All Drink, a documentary which explores Jamaica's ethnomedical heritage of making Roots Tonics.

Linton Hinds, Jr., is the director of the documentary. According to Hinds, Root Tonics are herbal remedies made with herbs, roots, and plants. He highlighted that Roots Tonics are said to heal everything from cancer to erectile dysfunction.

Hinds was born to Jamaican parents, and raised in Newark, New Jersey. He is a graduate of Loyola University, where he played basketball.

Hinds says that the roots and herbs he uses are Chaney Root, Moringa, Guinea Hen Weed, Strong Back, and Sour Sop Leaf.

“Things are out there,” said Hinds. “Many products don’t heal. They just treat because they are looking for long-term customers. The goal is to put you on those products for the duration of your life. Then you are paying for it for the rest of your life. When you eat right, you don’t have to worry about that. You can just take the root and eat that. You also have to exercise. That’s why I felt it was important to do this documentary.”

Orange, NJ. Rutty is also a manufacturer of Roots Tonic. Hinds’ wife Deborah did the voiceover for the documentary.

“I wanted viewers to see a lead doctor,” said Hinds referring to Dr. Mitchell. “I didn’t want them to believe the documentary was some mumbo jumbo. Dr. Mitchell has studied Jamaican and ethnic culture. Every culture understands what plants can do, and the benefit of plants.”

Hinds, said a total of five people were interviewed for the documentary, and it took five months to complete. He noted he has no formal training in film, but shot half the documentary. The film’s Cinematographer Ryan Hohn shot the other half. Hohn resides in Kingston,

Jamaica and shot the interviews that were conducted in the region.

“It was a real privilege working on this documentary,” said Hohn. “I live in Jamaica, and Linton lives in America, but we are on the same path. It’s about getting information out there so people will see it. This whole movement is about people being healthy, conscious of themselves and to stop being programmed. Nature is still around. It has everything we need.”

Hohn, who owns a company called Yardreel, says he also does directs, produces, and does photography.

“We have gotten a lot of positive feedback about the documentary. It shows another option of how to live. Roots and herbs boost your immune system. We are at a turning point in history now. We have been building up to COVID-19. Every year, it was something different. There was SARS, and H1N1. If you paid attention, you knew COVID would happen. It was really no surprise. Those who took care of themselves were ahead of the game.

“We have to preserve ourselves. Not kill one another, or kill our own selves with food. It’s about self-preservation.”

Roots Tonic: Jamaica’s Cure All Drink, is just over 16 minutes long and can be accessed by the following link: https://www.youtube.com/watch?v=mYBz7_4f2BY