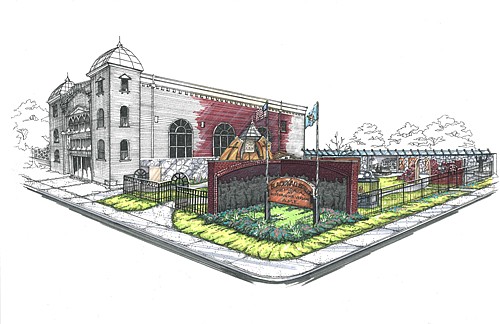 Tulsa, Okla.— The Black Wall Street Memorial committee and Tulsa Community Remembrance Coalition launched the “10,000 Brick Campaign” throughout May to build a memorial to Black Wall Street in honor of those lynched during the 1921 Race Massacre.

Beginning May 1, the month-long campaign will allow individuals to personally take part in building this powerful space and to raise funds for these important organizations. Individuals are encouraged to purchase one of 10,000 commemorative bricks that will surround a memorial. The brick will feature the purchaser's name, business or quote.

“Tulsa, Oklahoma has a legacy that we have been silent about for too long and it is time to end the silence,” said Dr. Tiffany Crutcher, the founder of the Black Wall Street Memorial committee. “Our coalition is committed to ensuring that the legacies of hundreds of African Americans murdered at the hands of racial violence is permanently woven into the scrolls of American history.”

Black Wall Street was a thriving hub of black entrepreneurship, and was bombed and burned to the ground between May 31 and June 2, 1921. Scores of white mobsters came from the southern part of the city in trucks and airplanes to carry out the violence. The Black Wall Street Memorial will honor the history and legacy of the community and all those who lost their lives in the massacre.

“I am so proud of this community for coming together during this uncertain time to pay homage to the souls we lost to the 1921 Race Massacre,” said Benjamin Crump, national civil rights attorney and National Legal Consultant for Black Wall Street Memorial Committee. “We must never let America forget.”

Over the course of the past year, the Tulsa Community Remembrance Coalition has also worked alongside the Equal Justice Initiative in Montgomery, Alabama, to honor the history and the lives of this

sacred land through a series of soil collections. Each soil collection serves to memorialize the life of a 1921 Tulsa Massacre lynching victim. The jars of soil will be housed inside the Historic Vernon AME Church on N. Greenwood as a part of the memorial.