Maeve Reston and Stephen Collinson, CNNA roller coaster battle is unfolding for the critical state of Florida between President Donald Trump and Democrat Joe Biden, as counting begins in earnest in a | 11/3/2020, 9:16 p.m. 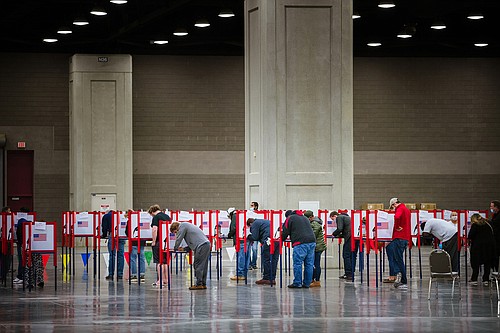 A roller coaster battle is unfolding for the critical state of Florida between President Donald Trump and Democrat Joe Biden, as counting begins in earnest in a momentous election unfolding amid the worst pandemic in 100 years.

A win for Trump in the Sunshine State, which is still too early to call, would keep alive his bid to keep open his pathway to the 270 electoral voters needed to win a second term. The state is tightly poised with more than 90% of votes counted, but there is concern for Democrats in populous southern Miami-Dade county where Biden appears to be underperforming Hillary Clinton's mark in 2016.

Polls are now closed across vast swathes of the eastern and central part of the country on a nerve jangling night that will set the nation's course for the next four years and cast judgment on the most tumultuous presidency of the modern age. Results are flowing in from battlegrounds and it's too early to make a projection in key states like Arizona, Colorado, Michigan, Minnesota, Wisconsin, Texas, Georgia, North Carolina, Virginia and Ohio.

Eyes are now also turning to the key states of Pennsylvania -- which could be the kingmaker in a close race -- and Georgia, where Democrats hope to turn a Republican state blue.

An early exit survey of voters in Florida offered clues about why Biden was underperforming Clinton in Miami-Dade. The early exit polls in the state registered a substantial decrease in support for the Democratic nominee. Just more than half of Florida Latinos said they were backing Biden in CNN's early exit polls, compared with 62% who backed Clinton four years ago. But Biden appeared to be doing better with independent voters in Florida than Clinton.

Former President Barack Obama made two trips to Miami-Dade in the closing days of the race to drive up turnout. Biden appears however to be doing better than Clinton in some suburban counties elsewhere in the state. If the former vice president were to underperform Clinton in Miami-Dade, he would need to run up Democratic margins in other parts of the state like Hillsborough County, which encompasses much of Tampa and its suburbs, or Duval County around Jacksonville.

Miami-Dade, which Biden is still likely to win, has large concentrations of voters of Cuban and Venezuelan descent who tend to be more conservative than other Latino groups and were targeted by the President with claims that Democrats were akin to socialists.

Close races across the nation Democrats are beginning to look toward Ohio and North Carolina where wins for Biden could block Trump's path to 270 electoral votes.

The former vice president carved out an early lead in North Carolina, based on big suburban counties around the cities of Raleigh-Durham and Charlotte. But a large portion of the vote already counted was in early ballots which tend to favor Democrats. Biden is running strongly in the Buckeye State, where a smaller proportion of the ballots counted are early vote. So far, he is running more strongly in rural counties that he is likely to lose than Clinton did, an important consideration.

Even within the patchwork of early returns, some trends were emerging that pointed to the fact that is a very different race than 2016. In states like Ohio and parts of Florida, Biden appears to be performing better in the suburbs than Clinton did four years ago.

Historic amount of early votes Across the country, officials were counting the more than 100 million votes that were cast before Election Day, according to a survey of election officials by CNN, Edison Research and Catalist. Those early votes represent more than 47% of registered voters nationwide and six states crossed their 2016 threshold of ballots cast. Signs of an extraordinarily engaged electorate continued on Tuesday.

In an unprecedented move, which could indicate some mail-in votes are in danger of not reaching their destination in time to be counted, a federal judge in Washington ordered the US Postal Service to start sweeping all processing facilities by 3 p.m., including in parts of battleground states Pennsylvania, Michigan, Texas, New Hampshire and Florida. Democrats had previously criticized the US Postmaster General Louis DeJoy, a Trump donor, for introducing reforms in the agency that they said could slow down the delivery of mail-in ballots.

Democrats are nervous about widespread slowdowns within the Postal Service system after budget cuts and staff shortages, which has led to intense scrutiny of DeJoy's motivations. In the closing days of the campaign, Trump went so far as to suggest that vote counting extensions in Pennsylvania could be "physically dangerous."

In Arizona, where the early ballots cast showed remarkably even levels of engagement by both Democrats and Republicans, long lines formed Tuesday morning in populous Maricopa County, which encompasses Phoenix and its suburbs, and also in Republican strongholds including Chandler, Glendale, Gilbert and Surprise.

Polls began closing at 6 p.m. ET but there are wide variations in ballot counting rules across the country. Florida, for example, has been tabulating early ballots under state rules, but some areas of Pennsylvania will not begin opening vote-by-mail ballots until Wednesday morning.

The economy is the top issue on the minds of voters Tuesday, according to the preliminary results of a nationwide CNN exit poll. Those results are incomplete because Americans were still voting, but in those early measures about a third said the economy is the most critical issue. About 1 in 5 said racial inequality is the top issue and 1 in 6 said the coronavirus pandemic was most important to their vote. However, a majority said the nation should prioritize containing Covid-19 over rebuilding the economy.

Republicans have made a huge effort to invalidate ballots and limit voter turnout through legal challenges and questionable monitoring tactics that bordered on voter intimidation in some states. Trump spent his final days trying to cast aspersions on vote counting, insisting that a winner should be declared on Tuesday night, even though America has long counted ballots well into the days and weeks after Election Day.

The variation in counting procedures and the historic numbers of vote-by-mail ballots that must be opened and tabulated means that early night tallies after the polls close will not necessarily be predictive of the final results, in part because polls show that Democrats have favored mail-in ballots while many Republicans preferred to cast ballots in person on Election Day. With Biden leading in many national and battleground state polls, the President's team is counting on explosive Election Day turnout within the GOP and relying on their intensive, data-driven ground game to turn out quiet Trump voters, who they say have not been reflected in the polls.

Biden and Trump close their campaigns At the end of what has been a remarkably stable race, the President crossed the finish line after a frenetic sprint across the battleground states, during which he continued to undermine the integrity of the election by falsely raising the specter of cheating in the possible tipping point state of Pennsylvania. He painted a dark portrait of what America could look like under a Biden administration, claiming that the former vice president would trigger an economic collapse with extended lockdowns to stamp out the virus.

After months of refusing to commit to a peaceful transfer of power and repeatedly lodging false claims about widespread voter fraud -- when there is no evidence that it exists -- the President gave a more muted interview to "Fox & Friends" Tuesday morning, predicting that he had a "very solid chance of winning" and said he would declare victory "when there's victory, if there's victory," adding there is no reason to play games. He later visited Republican National Committee offices in northern Virginia and predicted a "great night ahead," but also reflected the uncertainty of Election Day, saying he had prepared neither a victory speech nor a concession speech.

"Hopefully we'll be only doing one of those two and you know, winning is easy. Losing is never easy. Not for me it's not," he said.

Speaking with reporters Tuesday afternoon, Biden reminisced about the lessons he has learned over nearly five decades in politics and said that he was hopeful about the changes he has seen in race relations and political engagement. In response to Trump's efforts to undermine the election, he underscored his view that a president cannot determine the outcome of an election -- only the voters can.

Biden ended his final day of campaigning on a more optimistic note, promising to unite the country and calling it the "beginning of a new day." On Tuesday morning, he sought to remind Americans of his blue-collar roots with a visit to his childhood home in Scranton, Pennsylvania, where he was surrounded by supporters on the street outside who chanted "Scranton loves Joe." Inside on one of the living room walls where he grew up, he wrote: "From this House to the White House with the Grace of God," signing his name and the date "11.3.2020," before heading to Philadelphia where the campaign is hoping to drive up turnout in the final hours.

A campaign of contrasts Trump plans to hold an election night gathering of some 250 people at the White House despite admonitions from the administration's own medical experts against indoor gatherings at a time when coronavirus cases are rising in most states. Biden plans to address supporters in his home city of Wilmington, Delaware.

Through the bitter end of the campaign, Trump never moderated the angry, xenophobic tone of his rallies even as he faced alarming drops in his support among suburban women, seniors who have been disproportionately impacted by the pandemic and even White working class voters with no college degrees who overwhelmingly supported him in 2016.

Biden's team has been emboldened by signs of huge turnout among young voters, as polls suggest that he has built a massive lead among female voters while cutting into Trump's margins with blue collar voters, particularly in the critical Midwest region. At the same time, the former vice president has not appeared to be matching Hillary Clinton's levels of support among Latino voters and among Black men, leading to an intense final push by the Democratic team to turn out more of those voters for Biden.

As both campaigns eye multiple paths to 270 electoral votes, Biden must hold the swing states that Clinton won in 2016, including Nevada, Colorado, New Hampshire, Minnesota, and then, in the most viable scenario for the former vice president, rebuild the so-called "Blue Wall" in the Midwest that Trump blasted through in 2016 by retaking Michigan, Wisconsin and Pennsylvania for the Democrats.

That route appears most favorable for Biden because CNN's Poll of Polls shows Biden's current lead in Wisconsin at 10 points; a lead in Michigan at 9 points and a narrow advantage in Pennsylvania with 6 percentage points. If Biden is not able to flip Pennsylvania, he needs to create an alternative route to power through tighter battleground states in the Sun Belt, such as North Carolina, Florida, Georgia or Arizona.

Trump is facing a more difficult path to 270 electoral votes, but his team is confident that they have outmatched the Biden team with their ground game, particularly after the Democrats pulled back on their door-to-door canvassing efforts due to the pandemic.

The President is trying to replicate his 2016 map, but if he loses Pennsylvania, Michigan and Wisconsin to Biden, he only has a theoretical path to the presidency by playing on Democratic turf where he campaigned this past week. Those paths could include Trump flipping Minnesota, a goal of his ever since a narrow loss in the state in 2016, or a combination of Nevada and New Hampshire.

This is a breaking story and will be updated.