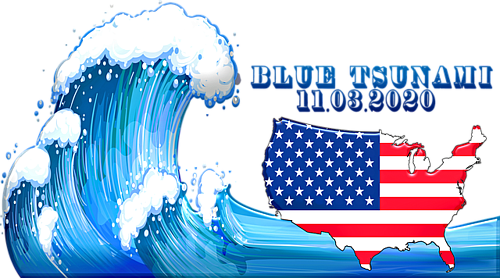 While much of the country held its collective breath awaiting the results of the 2020 Presidential Election, Maryland Democrats cruised to a sweeping victory in down- ballot races, including in Baltimore, where voters chose City Council President Brandon Scott as the city’s next mayor. Nick Mosby easily defeated Republican Jovani Patterson to win Scott’s now-vacant City Council President’s seat. After Tuesday’s voting, City Council remained all Democrats.

The state’s high voter turnout proved a factor in just about every contested race and contributed heavily to a Democrat sweep.

Representative Kweisi Mfume won his race for the U.S. House in Maryland’s 7th District against Republican Kimberly Klacik, backed by President Donald Trump after she co-signed Trump’s condemnation of Baltimore under the late Rep. Elijah Cummings.

“Voters have spoken loudly and clearly,” Mfume told supporters gathered in the city on Election Night.

Unofficial tallies had Biden defeating Trump in Maryland, with nearly 64 percent of the vote than about 35 percent for the President. With a record number of early voting and, perhaps, a new high in total votes, Biden already surpassed the all-time mark set by Barack Obama.

Trump collected 66,706,923 votes (48.1 percent) and could join Biden in exceeding Obama’s total. Still, the race between the former Vice President and Trump has come down to a few battleground states’ results. With a large swath still left uncounted as of Wednesday morning, Biden maintained an electoral college lead of an estimated 238 to 213 – 270 is needed to win.

Biden also flipped Arizona, making him the first Democrat to win that state since 1996 when Bill Clinton claimed victory. Winning Arizona means Biden could lose one of these states— Pennsylvania, Wisconsin or Michigan, but still capture the presidency.

Georgia where a large swath of votes remain uncounted in predominately Black Atlanta and Fulton County, also remained in play for Biden. By early afternoon Wednesday, Biden had taken the lead in Wisconsin while the other states remaining had yet to complete their counts. Each of those states counts ballots cast on Election Day first.

Trump asked that the count end before officials tally mail-in votes, which arrived in record numbers.

Meanwhile, in Baltimore, Scott says he is ready to lead the city to new heights. “Our city has voted for a new way forward,” Scott said. “I have learned so much from my time serving on the City Council, and I’ve also learned countless lessons from my colleagues. I’ve watched their success and their struggles. It could not be more clear that we need a new way.”