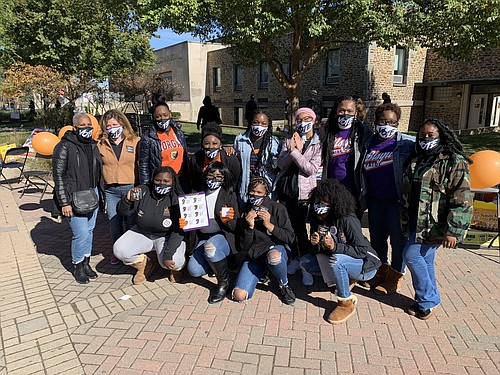 A group of senior students from the Baltimore Leadership School for Young Women (BLSYW) took it upon themselves to go above and beyond, to educate and support local voters this past Election Day.

The four young ladies— Cayla Moore, Eyanna Simmons, Jamira Collins and Jamia Rogers— were joined by staff volunteers at the voting site on the campus of Morgan State University to galvanize and greet community members as they headed to the polls.

Thanks to a grant from Party At The Mailbox, a Black Girls Vote Initiative sponsored by the National Conference on Citizenship, the students were able to develop a 10-minute nonpartisan video educating community members on everything needed to know regarding the voting process. 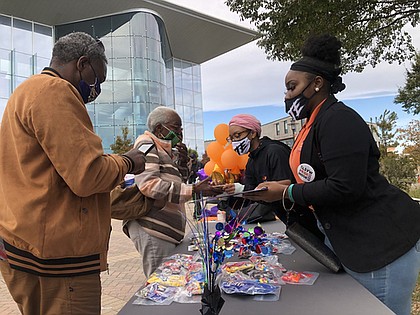 “Though this is a presidential election, it is also important to recognize that you are not just voting for a presidential candidate,” said Moore at the introductory portion of the video. “If you live in Maryland, you are also voting for representatives of the state.”

The nonpartisan video, entitled “Simplify The Vote,” informed viewers on different ways to vote, what polling locations voters could go to to cast their ballots (along with early voting locations), and outlined each candidates’ political party. The video also underlined each ballot measure, referendum, question and issue.

At the polls, students distributed QR codes with a link to their Simply The Vote video for voters to view before making their selections. In addition, they offered snacks, water and chairs for elderly voters.

Moore, who serves as the senior valedictorian and holds a 4.22 GPA, originally had the idea of producing the Simply The Vote video. After reaching out for suggestions from her classmates, all of whom hold GPAs of 4.0 or better, her idea materialized.

“Overall, my goal was just to help people make educated decisions when they were deciding on candidates,” said Moore, who plans to major in psychology after graduating from BLSYW.

There was a man and a woman who watched the video clip and thanked the students, Moore added, considering they weren’t well-informed of the local candidates running for office.

“We felt like, sometimes looking at the ballot is kind of confusing so we tried to make it simple,” Moore said, adding that she and her classmates got positive feedback. “A lot of people were happy that they were able to see a video that simplified things for them.”

Throughout the week leading up to November 3, the BLSYW students used social media platforms to notify the community about their Simplify The Vote project.

Paula Dofat, senior director of college and career success at BLSYW was at Morgan State to monitor the students as they engaged with the community on Election Day.

Dofat said she sees this project as recurring whenever a major election comes around, though the four seniors are leaving in 2021. She further said that The Simplify The Vote blueprint is something BLSYW may explore for future students to take part in.

“I hope the community knows and understands that our young people are more aware of what’s happening than they think, and it’s not just the things that they see on the news. They’re actually doing research,” Dofat said. “This project for me, it blew me away that this is how they (students) were thinking and that they’re trying to find ways to be a part of the process, to be a part of the things that’s happening in our world.”