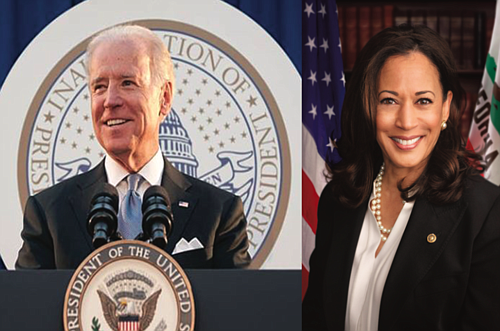 News of their victory sparked spontaneous celebrations around the country. In Washington, D.C., Philadelphia, New York and Atlanta people took to the streets on foot and in cars in celebration with Biden flags and signs. Times Square filled with a crowd unseen in months since the COVID-19 pandemic began in March.

In Washington, D.C., cars honked horns driving up and down Connecticut Avenue and around the White House. A large crowd assembled at Black Lives Matter Plaza on 16th Street as close to Lafayette Park as they could get near The White House. Streets around the White House were fenced off creating a large perimeter around the streets that would allow people to get clear video and still photos of the building.

The level of celebration in several cities was reminiscent of the revelry seen after a sports team wins a championship. Bottles of champagne were opened on the street and music played loudly. Relief after four years of Donald Trump’s decision-making and endless controversies, tensions and policy decisions were clearly on display in public.

“Our work begins with getting COVID under control,” Biden told thousands of people in Wilmington, Delaware. On November 9, Biden will formally announce a task force to confront the COVID-19 crisis.

“In an election of record-breaking turnout, the American people have made clear who we are and who we aspire to be. Difficult times are ahead, but I have no doubt President-Elect Biden and Vice President-Elect Harris have what it takes to help us build back better. I look forward to working with them to tackle the challenges ahead, from defeating the pandemic to addressing the racial and economic inequality that continues to grip our nation,” wrote Rep. Marcia Fudge (D-OH) after Biden was declared the winner.

Trump is unlikely to admit the loss and concede. In the end, on January 20, 2020 at noon, the federal government and all executive power will be in hands of Barack Obama’s former Vice President and now the new President of the United States, Joe Biden.