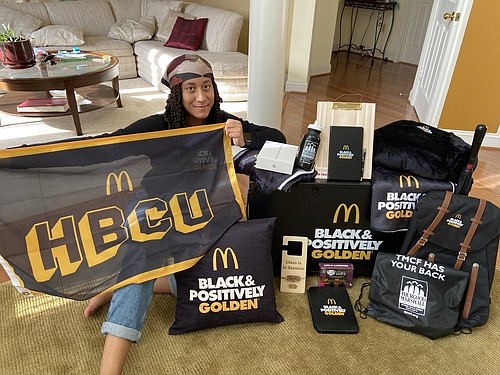 Morgan State University sophomore Melanie Battle is the winner of a McDonald’s Black & Positively Golden® Scholarship. In addition to a $6,800 scholarship, she received a tablet, school supplies, and other items. Courtesy Photo

“They put it in our minds that HBCUs are where it’s at and where you grow as a Black person in the world,” said Battle.

The only question was which HBCU she would attend. She opted for Morgan State University. Now a sophomore at the school, Battle’s experience at Morgan set the narrative for a winning essay that landed her a $6,800 scholarship.

Battle is among the winners of a scholarship awarded through McDonald’s “$500,000 Black & Positively Golden® Scholarship Fund.” The fund helps students who attend Historically Black Colleges and Universities (HBCUs) continue their education this fall, despite impacts of COVID-19.

She is among three students from Morgan State University and 34 collegians overall who were all awarded up to $15,000 Black & Positively Golden Scholarships. The other Morgan winners were Diamond Patrick and Micah Caldwell. 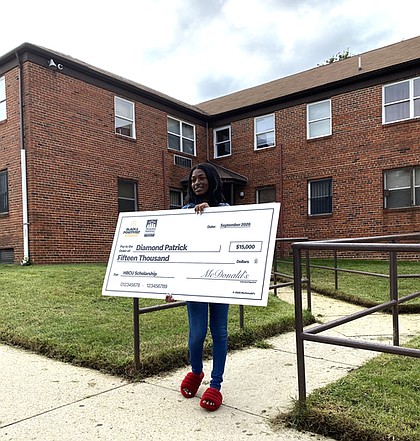 “This scholarship gives me extra money to pay for school and focus more on my education and learning instead of how I was going to pay for it,” said Battle. “I have other scholarships I have been awarded, but this really helps. I am happy and excited to have this opportunity, and really grateful for this scholarship.”

Facilitated by the Thurgood Marshall College Fund (TMCF), scholarships will be distributed for the 2020-2021academic year. The announcement comes in conjunction with the launch of the 2020 ESSENCE Festival of Culture: Unstoppable Virtual Experience, in which McDonald’s officially kicks off its partnership with the ESSENCE Girls United HBCU initiative.

“I think it is amazing such a huge corporation like McDonald’s is reaching out to the Black community and helping to support it,” said Battle. “It’s wonderful they are willing to put in the time and effort to do this for Black students.”

The 19-year-old is a 2019 graduate of North Point High School in Waldorf, Maryland. She is a multimedia journalism student at Morgan, plays on the school’s volleyball team, and is a sophomore class senator. “I was in the car with my mom who was getting gas at Costco when I saw an email that I was among those selected to receive a scholarship,” she recalled. “There was so much energy in the car. It was overwhelming.”

In vying for the scholarship, candidates submitted applications via TMCF’s website. Winners were selected from thousands of applicants by a distinguished panel of judges established by TMCF and McDonald’s. Recipients were selected based on their academic achievement and community involvement.

“To me, attending an HBCU means learning and growing with my people. It means being unapologetically myself in the most comfortable situation possible. It means learning different parts of my culture from people that look just like me, but grew up in a different part of the state, nation and even world. I have been told multiple times by so many different people that they would never attend an HBCU because they crave “diversity” on their campus. “I find it amazing how the world believes that diversity only comes in one form; multiple races in the same environment. Diversity comes in so many other forms that are not even related to race. Attending Morgan State University has opened me up to so many perspectives. I have learned new slang, new ways of thinking and even new ways to live.”

She is also a member of the National Council of Negro Women Morgan State Section and the social media manager for the Morgan State Women’s Volleyball team.

“I think scholarships that go to HBCU students are so important,” said Battle, noting how much she loves Morgan. “The Black community is made up of so many people with great ideas to improve the world. We have the ideas and the knowledge, but in the Black community, money is an issue. Money is needed to execute these ideas and bring our visions alive. Funding education for Black students, helps to bring our dreams and ideas to fruition.”

For more information about the Black & Positively Golden® Scholarship Fund and other education resources, visit