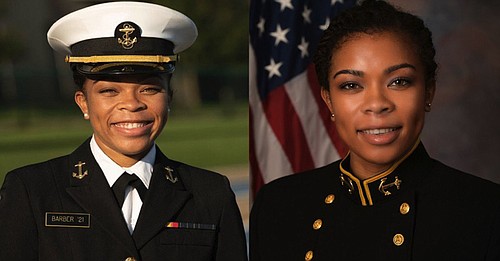 Midshipman 1st Class Sydney Barber, a mechanical engineering major from Illinois, has been named brigade commander for the spring semester at the U.S. Naval Academy in Annapolis, Maryland.

Barber, a track star with a stated desire to work as a Marine Corps ground officer, becomes the first Black woman to lead the Naval Academy’s student body.

The brigade commander heads the Academy’s day-to-day activities and trains the class of approximately 4,500 midshipmen. Barber becomes the 16th woman to serve in that role.

“Earning the title of brigade commander speaks volumes, but the title itself is not nearly as significant as the opportunity it brings to lead a team in doing something I believe will be truly special,” Barber said in a news release. “I am humbled to play a small role in this momentous season of American history.”

As a walk-on sprinter and hurdler of the Navy Women’s Varsity Track and Field team, Barber has lettered all three years of competing and is an Academy record holder for the outdoor 4x400m relay, according to her biography.

She is the co-president of the Navy Fellowship of Christian Athletes Club; secretary for the National Society of Black Engineers; and a USNA Gospel Choir and Midshipman Black Studies Club member.

Barber is recently credited with mobilizing a team of more than 180 midshipmen, faculty, and alumni to develop the Midshipman Diversity Team to promote greater diversity, inclusivity, and equity within the Brigade.

“Sydney stands out amongst her peers, for not only her exemplary record but for her clear vision of how she intends to make the world a better place and her accompanying bias for action,” said Lt. Commander Darby Yeager, a member of the U.S. Navy Academy’s Truman Scholarship Selection Committee. “We were incredibly proud to have Sydney represent the Naval Academy in her Truman Scholarship interview this year.”

Janie Mines, who became the first Black woman to graduate from the Naval Academy in 1980, expressed her excitement for Barber on Twitter.

“This bought me to tears. This young woman, Midshipman Sydney Barber, will be the first Black Female Brigade Commander at the U.S. Naval Academy. 40 years later. Thank you, Sydney! Love you!” Mines tweeted.