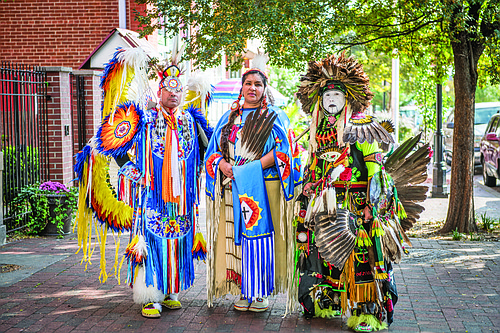 Baltimore American Indian Center (BAIC) was the recipient of the 2017 Maryland Traditions Heritage Award in the category of “Place.” Originally founded in 1968 as the American Indian Study Center, it primarily served as a resettlement resource for Indians who had migrated to the city seeking employment. Now, the center functions as a cultural magnet drawing in a dispersed community by offering culture classes; annual powwows; a full-fledged community museum; a multipurpose meeting space; and more. Edwin Remsberg/File Photo

Happy National American Indian Heritage Month! Since 1990, the United States has proclaimed November a time for all Americans to recognize and celebrate the many rich and diverse cultures and contributions of peoples indigenous to this land. The thirty days of November, the thirty years since this proclamation was first made, or even the 244 years comprising the entire history of this nation are so miniscule in comparison to the thousands of years of continuous Native stewardship of this land.

Yes, all of what is today known as the United States of America is occupied Native land. This includes the area now known as Baltimore, which was home to Piscataway and Susquehannock folks long before John Smith ever sailed up the Patapsco. Historically, members of other indigenous nations also traversed this area and they still do. Some even choose to stay.

Did you know Baltimore is home to the largest community of Lumbee Indians outside of their tribal territory, in what is today known as North Carolina? Following World War II, thousands of Lumbee migrated to the city seeking work and a better quality of life. They established their community on the east side of town, in an area bridging the neighborhoods of Upper Fells Point and Washington Hill.

For a time, this area came to be known, affectionately, as Baltimore’s “reservation.” A complex set of factors ranging from upward mobility to Urban Renewal resulted in their movement and displacement in the years since, but Lumbees remain the most populous group in Baltimore’s intertribal American Indian community today. Two enduring Lumbee contributions to the city are the Baltimore American Indian Center & Heritage Museum located at 113 S. Broadway; and the Indian Education Program of Baltimore City Public Schools.

Maybe you have never heard of a “reservation” in East Baltimore, or the Indian Center, or the Indian Education program. Good for you, if you have! If you haven’t before, you have now. It’s fair to say most Baltimoreans don’t tend to think of our city as a Native place. This is understandable. It’s a symptom of settler colonialism.

Settler colonialism is a unique form of colonialism in which the colonists or settlers never leave. Therefore it never ends. The primary interest of settlers is the land. They have no use for indigenous populations and must therefore either kill or otherwise disappear them, in order to replace them, while establishing their own identity as rightful owners and inhabitants. Over time, the settlers come to be regarded as the natural owners and inhabitants.

At different times, and arguably at all times, genocide has been the United States’ policy toward American Indian people, yet we’re still here.

Disappearance is a secondary goal and it continues to be accomplished in many ways. Two main ways, which are related, include a relegation of Native people to the past and the perpetuation of stereotypes intended to represent us.

Again, we are still here. We are your neighbors, coworkers, friends, and sometimes, even family. We come in all colors, textures, shapes, and sizes. We come from all walks of life.

American Indian people and African American people, in particular, have shared history and shared present struggles. Indigenous sovereignty— or the right to self-determination— is tied to Black liberation. We know that a major strategy of colonialism is to divide and conquer. When we unite, amazing things happen.

This year, for the first time ever, Baltimore City recognized Indigenous Peoples’ Day instead of Columbus Day on October 12. The conditions, that made this change possible were created by the movement for Black Lives, and the change itself was the result of the organizing of Black and Indigenous folks— and Black Indigenous folks— and allies.

2020 has been a tough, yet incredible, year to be alive. Let’s celebrate (safely) every day, not just every day in a given month, because we’re worth celebrating all year. Every day is a victory. Let’s continue to lift one another up to see what more we can accomplish together.