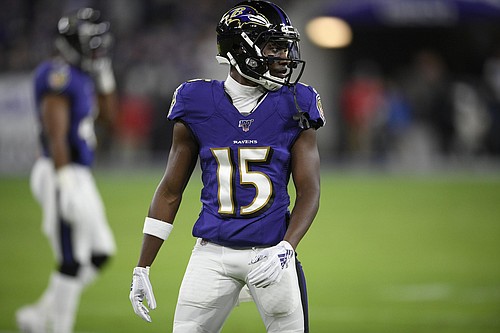 The Baltimore Ravens had visions of explosive plays when they selected former Oklahoma wide receiver Marquise ‘Hollywood’ Brown with the 25th overall pick in the 2019 NFL Draft. The roadrunner like receiver was nursing a foot injury at the time but the Ravens were willing to wait for him to recover and be a playmaker along with Lamar Jackson in their offense.

Brown worked through the rehab process and made his debut against the Miami Dolphins in the season opener. He recorded four receptions, 147 receiving yards and two touchdowns. Despite playing only 14 snaps, Brown became the first player in NFL history to score two touchdowns of 40 yards or more in his first game.

Brown went on to finish 46 receptions for 584 yards and scored seven touchdowns. He provided the deep threat that Baltimore needed in their offense and Jackson won the league MVP.

The Ravens expected last year to carry over when this season started. Brown reported to camp with a noticeably more built physique that was would help him to be able to withstand the wear and tear that comes with playing the game.

Brown recorded five receptions for 101 receiving yards in the 38–6 victory over the Cleveland Browns to start the season. It seemed like he would pick up where he left off.

The Ravens are 10 games into the season and Brown has 32 catches for 431 yards and two touchdowns. The most frustrating moment for Brown was against the Pittsburgh Steelers on November 1 when he only caught one pass for three yards in a 28-24 loss.

Brown expressed his frustration on social media after the game when he posted a Tweet, which said “What’s the point of having souljas when you never use them Never!!” due to his lack of involvement in the offense. Ravens head coach John Harbaugh spoke to Brown and the post was removed. However, the lack of his involvement continues. Brown has only caught five passes and gained 52 yards over the last two games.

Harbaugh was asked about Brown’s involvement and trying to make sure he gets touches when asked about the dynamic playmaker on Monday.

“We don’t try to feed anybody the ball. You try to create plays where you can against what you’re seeing, and the game plays out,” Harbaugh explained. “You get coverages and guys get open or they don’t get open. The quarterback can see it, or he can’t see it when they are open— with protection or where his read ends up taking him. The ball gets thrown well, or it doesn’t. It gets caught, or it doesn’t— that’s kind of how it works.”

It’s important to get Brown involved because he takes the top off of defenses. The Ravens like to run the football so having a player present a threat that forces defenders to back up creates space for Jackson and the running backs.

The big plays that Brown makes gives the rest of the team a boost of energy also. That is something the Ravens will need after they announced on the afternoon of Monday, November 16 fans will not be allowed at the game versus the Tennessee Titans on Sunday, November 22 at M&T Bank Stadium because of the spikes with the COVID- 19 situation in Maryland.

“The in-stadium energy and passion Ravens fans provide on game day cannot be duplicated,” Ravens officials stated. There is nothing quite like hearing the roar from a packed house at M&T Bank Stadium on game day. Since that will not happen when the Ravens host the Tennessee Titans a few big plays from Brown could give the team an extra boost.