Spreading good vibes is one musician’s answer to the pandemic 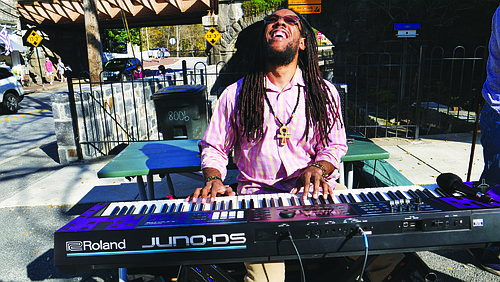 Aaron Hill performs at the corner of Maryland Avenue and Main Street in Ellicott City with Street Serenades on November 8, 2020. David Marshall

But on Sunday, November 8, 2020 the closer you got to the famed corner near the Baltimore & Ohio Railroad Museum, a spirited melody emerged, and a crowd gathered nodding their heads and tapping their feet.

This is where 38-year-old Aaron Hill of West Baltimore and his musical crew, The Aaron Hill Trio, set up shop for the day. Hill is on the keyboard. Eddie Hrybyk commands the bass. Eric Kennedy keeps the drumbeat. They call the gig Street Serenades.

“I started this back in May as a way to adjust to the change we were all going through and especially during a time when people needed as many good vibes as possible as the entire world shifted in terms of how we would do our jobs and live our lives,” said Hill. “So, it seemed natural for me to take my entire act and music outside to the streets.”

For the last six months, Hill has crisscrossed locations throughout Baltimore City and surrounding counties offering the free concerts. Sometimes, he is out five days a week delivering jazz standards and self-written melodies. Hill also tours with his other group Fruition Experience which specializes in cosmic soul. With 100 concerts under his belt to date, his calendar shows outdoor concert bookings through the end of the year.

“It’s been all 100% love. People have accepted it as the gift that it is,” said Hill. The best thing I like about this is that I get to meet new people everyday and surprise people with something they weren’t expecting when they turn the corner.”

But for some in the crowd, the concerts are something they have been waiting for. Hill boasts a loyal following on social media. Fans spread the word across social platforms about his next appearances. They show up to support him with their presence, bringing dollars to drop in the tip basket.

“Oh heavens, it’s a life saver,” said Laverne Gray. She made the 30-minute drive from Govans to take in the experience. “When you are used to hearing live music and then all of the venues are shut down, this is like water for the thirsty.”

Hill is an accomplished musician and entrepreneur landing his first professional job as a church keyboardist and music director at 21. He launched his own music production company at 23 and has worked for himself ever since.

However, like other local artists, the pandemic has upended some of his long- standing performance bookings, so he too has had to pivot to keep his ventures healthy.

For sure, it has been a tough year for area artists. According to the Baltimore Office of Promotion & The Arts, artists surveyed by BOPA estimated a loss of more than $1.5 million in projected income due to COVID-19 from the start of the pandemic through June 2020. To help, BOPA and community partners set up the Baltimore Artist Emergency Relief Fund in April. More than 600 people applied for emergency assistance. BOPA said it has awarded 322 area artists $500 mini grants.

But for Hill, so far, he has managed to stay afloat. He said a combination of creativity and hustle have kept his businesses in the black so far.

“During these times you have to think out of the box. You must be creative. You do need real business skills and business savvy more than ever now,” said Hill. “Ultimately surviving during these times as an artist or entrepreneur is about finding new ways to engage with people and making deeper connections.”

Hill said this phase of Street Serenades is just the beginning. He is working with his business manager to embark on a multi- city tour.

“This is going to grow. I’m going to see the country and the world with this,” said Hill.

David Marshall is professor and chair of the Department of Strategic Communication in the School of Global Journalism & Communication at Morgan State University.