Annapolis March underscores importance of showing up at polls, correction of racial injustices 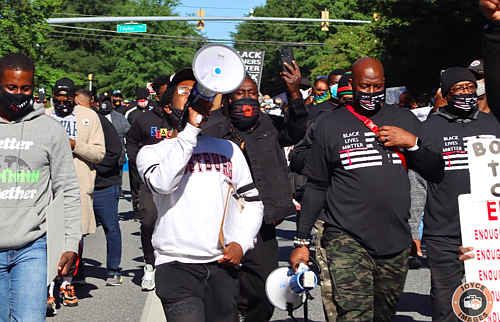 Over 1,000 people showed up in the name of unity for the 1,000 Men March that took place in Annapolis on Saturday, September 19, 2020. The march highlighted the plight of people of color, including unwarranted shootings of African Americans by bringing together civil rights organizations, elected officials, community members and business people in an effort to draw attention to racial injustices. Additionally, the event underscored the need for people of color, and more African American men, to vote during the presidential election on November 3, 2020. Joyce Images

Although the coronavirus has often brought the issue of isolation to the forefront because of need to social distance and quarantine, there have also been remarkable moments when the power of unity has proved to be unstoppable.

Saturday, September 19, 2020 marked one of those unprecedented times in Annapolis’s rich history, when over a 1,000 men, women, children, community leaders and elected officials participated in a peaceful 1,000 Men March. A sea of masked faces began to fill the streets from Navy-Marine Corps Memorial Stadium to Annapolis City Dock. Participants commemorated the 25th anniversary of the Million Man March held in the District of Columbia on October 16, 1995, while highlighting issues ranging from ending police brutality to the importance of voting in the upcoming presidential election on November 3, 2020.

The event drew a crowd of diverse ages, including young children. Over 1,000 people reportedly attended the event.

Randy Curtis, 33, a resident of Severn played a major role in organizing the largest event of this kind in Annapolis. His father, Bishop Antonio Palmer of the Kingdom Celebration Center and the United Black Clergy along with Carl Snowden, longtime civil rights activist and convener of the Caucus of African American Leaders, were also instrumental in organizing the event.

Curtis says he has worked with conscious leaders in other locations and wanted to do something for his home city of Annapolis. Holding police and citizens who are engaging in detrimental activities accountable, cleaning up the community, improving housing and addressing educational issues are among his noted concerns. He further said that related policies and procedures need to be changed; and he feels that officials such as Gavin Buckley, Mayor of Annapolis and Anne Arundel County Executive Steuart Pittman are approachable officials who also want to see positive change occur in the Black community. “My idea is to go to them (Buckley and Pittman) with strategic changes for policies and procedures, and fight all the way through, until we see change in the books,” said Curtis while mentioning his follow up plan. “And, I’ve learned enough to be humble to my elders. I’m actually having a meeting with all of the leadership that we have in the Black community and saying ‘let’s agree on three things that we want to see change in the immediate future and tackle those three issues up front.’”

Curtis led the charge to bring individuals and leaders together but he says he wants a collective voice to be heard. He added that he believes that participation by the younger generation in the event helped to dismantle the belief that the older and younger generation don’t see eye-to-eye on issues. The older generation was able to show by example how to come together for the sake of freedom, justice and equality for Blacks in America, including in Anne Arundel County.

Carl Snowden also pointed out that he believes that Curtis senses the need for more overall civic engagement and participation from African American males. “The major goal (of the march) was to demonstrate the need for people of color— in particular— to participate in another march that is going to take place. And that march is going to take place on November 3, when we march to the ballot box, hopefully in unprecedented numbers, to use our vote to become our voice. And so there is going to be a concerted effort by all of the organizations that were involved to energize, organize and mobilize African American voters to go to the polls in great numbers,” Snowden said. “As you know, African American men vote in less numbers than African American women. An idea here is to get African American men to follow the leadership of women who have used the vote very strategically to bring about our change. And so we hope to emulate our black women in terms of going to the polls in the numbers proportionate to our goal.”

Darius A. Stanton— founder of the Annapolis Arts, Sports and Leadership Academy— added that day’s mood sent a message of unity to over 10 statewide politicians. Voter registration was underway from the top of the March route all the way to the City Dock.

“I think the 1,000 Man March built a unified force to push the changes needed in our own communities to seek mental health, bring our family units together, to ensure we build our own economic base, make the needed reform and investments in education and the justice system, by voting and holding elected officials accountable,” said Stanton. “We are much stronger coming out of the march!