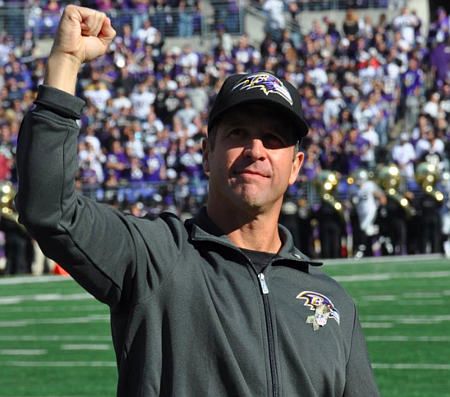 The Baltimore Ravens have become a part of many families in the city and surrounding areas. That is what happens when a team’s mindset and style of play embodies the city where it is located. Winning a couple of Super Bowls and being a perennial contender doesn’t hurt either.

Ravens head coach John Harbaugh is one of the two coaches who have brought a championship to Baltimore. He is the son of a coach and was raised with a tremendous work ethic and toughness. It’s no wonder he is close to the Ravens fans.

Plans to have 7,500 fans at M&T Bank Stadium for Ravens games have not materialized as the COVID-19 pandemic continues to alter everyone’s way of living. Harbaugh took time on Monday, October 12, 2020 to let the fans know he was thinking about them.

“I just want to say, we miss our fans. We have a great fan base; that stadium would’ve been rocking and rolling “ yesterday and they would've been fired up for what they saw. I think they would’ve been really into the game,” Harbaugh said about last Sunday’s game.

He went on to recreate the scene when he drives into the stadium and sees the fans tailgating. Harbaugh said he loves seeing the high-fives and smiling faces as well as the “not so smiling ones.”

The drum line at Ravens home games is one of his favorite parts of the game day experience.

“The thing that’s really cool at the game is the drum corps. I don’t know if the people on TV get a chance to hear that or not, but that drum corps is first- rate,” Harbaugh said with excitement. “It kind of reminds you of Friday night lights out there. I hope it’s a tradition. I’m going to put pressure on [Ravens president] Dick Cass right now. That needs to be a tradition that we carry forward here in the future, inside the stadium and outside the stadium, maybe even in the tailgating [lots] when that comes back. That drum corps is really ... it’s football, to me, and it really makes a statement.”

The Ravens fan experience isn’t just at home games. When they take the show on the road, fans go with them. That doesn’t go unnoticed by Harbaugh. He hopes to have the fans back at some point as the Ravens make their push towards a third Super Bowl trophy.

“We have great fans, even on the road. We miss you. We hear you. We know you’re out there. We know you’re cheering, and we really appreciate you. I just wanted to say that. So, thanks to all the people who are watching and care. We’ll see you soon when this whole thing gets back to normal,” Harbaugh added.