Local couple creates Winsults, the modern answer to The Dozens 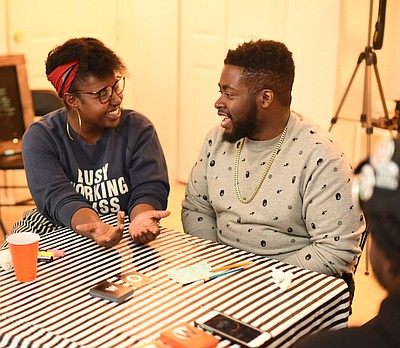 Lanee Higgins and Davon Ford came up with the game, Winsults on Valentine’s Day in 2019. The Baltimore County couple says they realized they were onto something special after hosting a play-test event. Courtesy Photo

First, there was The Dozens, a game popularized in the African American community in which two competitors square off insulting each other until the other gives up. Now, one couple is taking things up a notch with a new game called Winsults, where you win by insulting others.

Lanee Higgins and Davon Ford came up with the game on Valentine’s Day in 2019. “Davon was roasting me. As he was laughing, he started saying this should be a game,” Higgins recalled. On the spot, he started coming up with rules. From that day, Winsults was born.” Higgins said the couple realized they were onto something special after hosting a play-test event.

“We had just received the prototype and were ready to play. We had invited friends from all different circles to try out the game we created,” Higgins related. “It’s crazy how Winsults connected everyone in the room. Some of these people who had never met before were laughing together like they’d known each other for years.” Ford remarked that inviting strangers to play the game made the creation click for him.

“At first, I thought [people] were coming to tell us to quiet down, but they had come to play,” Ford recalled. “Once they joined in the game with us, I knew we had something special.”

Local couple creates Winsults, the modern answer to The Dozens

Winsults is a card game that tests individuals’ vocabulary and relationships. In a Winsults deck, there are 26 alphabet cards, nine warp cards, and an instruction booklet that comes with a disclaimer. Higgins and Ford said Winsults is best played with loved ones and those we are most comfortable with because the game captures the feeling of home.

“Imagine you’re at a party, and you bring Winsults,” the couple noted. “You’re playing against your significant other who you’ve only been dating for two weeks. It’s your turn. You get the letter’ B.’

“There are many insults that start with B— bum, bad, busted, big, burly— you go through them one at a time a five letter one that’s particularly chaotic. Forty seconds gone, only five seconds left to win the round. You can’t think of any other B insults. Do you unleash the chaos? That’s for you to decide.” Higgins and Ford said fate allowed their worlds to collide. “I am from the Philly burbs. I grew up in Willow Grove and then later Warrington, Pennsylvania, and came to Maryland in 2010 to attend Hood College,” Higgins said. She moved to Washington, D.C. in 2014, but Higgins returned to Baltimore County to resume her teaching career after graduating college.

“Davon is the reason I am still here. Being in the Baltimore area now feels like home,” Higgins said. Ford declared that he’s “from all over.” “I was born in West Baltimore but moved out to Randallstown when I was eight. I went to New Town High School and did a year at Morgan State before I dropped out to be an entrepreneur,” he said. “For a while, I was bouncing around. I spent some time in Montreal then Miami, but after 2015 I finally settled down with Lanee in Owings Mills.” Before creating Winsults, both Higgins and Ford said they’d always enjoyed board games.

“I’ve always loved board games. I’m a Monopoly fanatic, but no one wants to play with me because I’m a sore winner,” Ford remarked. “Sadly, I didn’t get to play as many games as I grew older, but now we make it a point to play more.” Higgins recalled visiting her grandmother each Sunday as a child and playing board games with her sisters and cousins. She’s kept at it.

“This summer, I compiled a list of 130- plus games created by Black game makers,” Higgins said. “Since June, I’ve made it my mission to own as many as I can. I currently have 16. Some of my favorites are ‘AUXGOD,’ ‘Actually Curious,’ ‘Verified the Game,’ ‘Tattoo Stories,’ and ‘Brilliant or B.S.’ I also love ‘Say it Loud!,’ created by Baltimore game maker Jaquetta Bess.”

The couple wants everyone to understand that Winsults is “more than just a product.”

“We’re tired of game companies trying to sell you something just to upsell you later,” Higgins said. “We want you to buy Winsults once and only once so you can enjoy it for years to come.”

To learn more about Winsults or to purchase the game, visit: www.winsults.com.