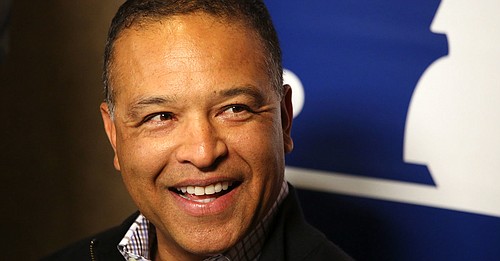 The Los Angeles Dodgers are the champions of baseball in large part because of a masterful managerial job by Dave Roberts, who becomes just the second African American skipper to win the World Series.

The Dodgers defeated the Tampa Bay Rays 3-1 in Game 6 at Globe Life Park in Arlington, Texas, the first-time Major League Baseball held the Fall Classic at a neutral site.

“It feels great,” proclaimed Roberts, who joined Cito Gaston of the Toronto Blue Jays as the only Black managers to lead their team to a world championship. Gaston’s Blue Jays won back-to-back titles in 1992 and 1993. The title is the seventh in franchise history for the Dodgers and first since 1988.

It marked the second celebration in less than a month for a Los Angeles professional sports team— the Lakers defeated the Miami Heat on October 11 to win the NBA championship.

“No, I don’t believe it’s prejudice,” Campanis blasted when Koppel asked the reason for the lack of African American managers in baseball. “I truly believe that they may not have some of the necessities to be, let’s say, a field manager, or perhaps a general manager.”

When Koppel responded by questioning whether Campanis believed that, the Dodgers’ boss didn’t relent. “Well, I don’t say that all of them, but they certainly are short. How many quarterbacks do you have? How many pitchers do you have that are black?” Campanis demanded.

To his credit, Koppel shot back: “I gotta tell you, that sounds like the same kind of garbage. That really sounds like garbage, if— if you’ll forgive me for saying so.” Unrelenting, Campanis volleyed: “No, it’s not garbage, Mr. Koppel, because I played on a college team, and the center fielder was Black, and the backfield at NYU, with a fullback who was Black, never knew the difference, whether he was Black or white, we were teammates. So, it just might be— why are Black men, or Black people, not good swimmers? Because they don’t have the buoyancy.”

Roberts, like Gaston before him, proved his so-called buoyancy. With a deft-touch, Roberts guided the Dodgers from a 2-0 and 3-1, deficit in the National League Championship Series against the Atlanta Braves.

Just 14 teams out of 89 in baseball history have come back to win a best-of- seven series after dropping three of the first four games. Since 1992, 11 Black men have managed Major League Baseball teams, including Dusty Baker, who came out of retirement this year to manage the Houston Astros to the American League Championship Series.

Roberts’ success is already legendary. Since he took over the Dodgers in 2016, he guided the team to three National League Championships. Now, he has delivered the ultimate prize, defeating the relentless and talented Rays in just six games.

Roberts has compiled an impressive 436-273 won-loss record for a Hall-of- Fame like .615 winning percentage. “No manager bats 1.000, as it were, and Roberts has made plenty of decisions this series and in the playoffs that have backfired or looked bad from the start,” Jon Tayler of Fangraphs wrote.

“Yet it’s worth noting that, aside from [Ray’s pitcher] Blake Snell’s excellent Game 2 [and Game 6] start and the back half of Game 4 culminating in the Yakety Sax routine, that was the final play, the Dodgers have been firmly in control of this Fall Classic,” Tayler noted. “It all came together as he planned, as all of his moves worked.”

After a COVID-shortened but challenging 60-game regular season and an extra playoff round that culminated into a world championship, Roberts said, he’ll let it all sink in.

“It means a lot for me personally, of course,” Roberts exclaimed as his players doused him and each other with champagne. “But for the Dodgers organization, the franchise where they’ve always been forward-thinking and groundbreaking as far as race and color barriers.

“So for the Dodgers and for me to be the manager of this ball club to bring a championship back to Los Angeles, I think it’s well beyond bigger than me.”