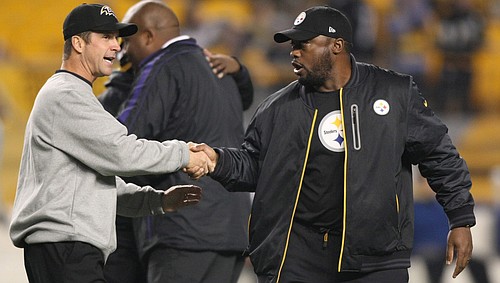 (Left to right) Ravens head coach John Harbaugh shaking hands with Steelers head coach Mike Tomlin. The Ravens and Steelers have one of the most intense rivalries in the NFL. Jason Bridge/USA Today Sports

The NFL has seen its share of rivalries over the years, but none of them are as intense as the Baltimore Ravens vs. the Pittsburgh Steelers. Although the two teams have great respect for each other, there is without a doubt some degree of dislike.

Steelers’ week takes on a different meaning than other games. “Our guys are excited every week. Every week is big. Every week is important. They all really matter, but this is the Steelers,” Ravens head coach John Harbaugh said. “We’ve never shied away from saying that it’s our rivalry game. On our side of it, we’ve always considered it to be that. We have a lot of respect for them, and we know what kind of game we’re in for. We understand what type of a game this is, and we’re looking forward to it.”

The Steelers hold a 28-24 edge over Baltimore in the series. The two teams have met four times in the postseason with Pittsburgh coming out with a 3-1 record. The Ravens and Steelers are the only two teams in the AFC North that have won Super Bowls. The race to the AFC North division title usually has a lot to do with the Ravens and Steelers matchups. That will be the case once again this season since Baltimore has a 5-1 record and the Steelers are 6-0.

The Ravens will have new participants in the rivalry game this time around. Baltimore traded for defensive lineman Calais Campbell during the offseason. He’s seen his share of Ben Roethlis- berger and feels the Steelers quarterback is playing his best football yet.

“It’s the best I’ve seen him. He’s always been great, but he’s locked in. He’s getting rid of the ball fast, making great reads, getting the ball to his playmakers [and] still throwing the ball well down the field. You have to love what you see on tape when you watch him,” Campbell said. “He’s a great player— Hall of Fame worthy. He’s a lot better player overall. He’s always been great, but they’re rolling. So, we have our hands full. I’m looking forward to the challenge. He’s a great challenge. He’s definitely up there with the best to do it.”

Ngakoue played college football at Maryland so he is no stranger to the Ravens. He will likely get his first action with Baltimore against the Steelers.

“It feels great coming back home,” Ngakoue said. “The Ravens are a team that I definitely used to watch a lot growing up. I was a Steelers fan growing up, which is quite ironic, but those guys had crazy battles as I remember being a kid watching them on TV. It was really low-scoring games, like 10-3 games. It was just a defensive battle.”

Ngakoue and Campbell enter their first Ravens vs. Steelers game together. It has become pretty clear that this one means a bit more than the others. “You could tell that this game carries a lot of weight,” Campbell said. “I’m a football fan. I’ve been watching football all my life and have been playing it long enough to know this is— there’s no bigger rivalry in sports, in professional sports, in my opinion, than this matchup. As a football fan, I’ve watched it from afar for plenty of years; I’m happy to finally be in it.”