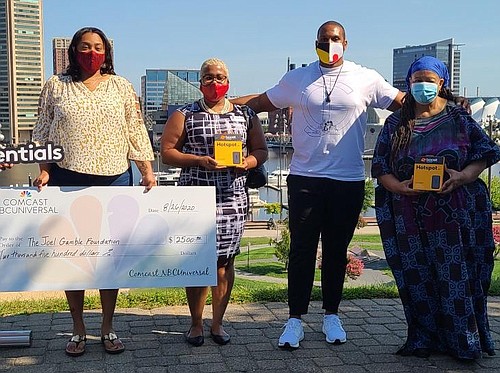 As a culmination of summer-long giveaways, the Joel Gamble Foundation partnered with Comcast to award more than a dozen technological devices and free internet to Baltimore City students as the new school year approaches. The event took place on the morning of August 26, 2020, at Federal Hill Park, where about 15 students from elementary, middle and high schools in Baltimore were gathered with their families and received free Chromebooks and tablets, courtesy of the Joel Gamble Foundation— an local nonprofit that has made bridging the technology gap one of its primary focuses throughout the summer.

“What I always look to do is make an impact and hopefully it will be long- lasting to the effects of students remembering this opportunity that we gave them, and then when they’re successful they could also return the favor and give back to students who may need as well,” said Gamble, a West Baltimore native who excelled as a football tight end at Carver Vocational- Technical High School, Shippensburg University and the Cleveland Browns, Philadelphia Eagles and Tennessee Titans in the NFL. “Everything I do in the community, I always want kids to remember it so that they get in the position that I’m in then they’re able to give back as well.”

The 15 electronic devices that were presented to students on August 26 brings the total number of donated technological resources to approximately 111 for youth in the Baltimore community.

The criteria for receiving an electronic device was simple: students who were interested were required to write an essay explaining how technology can help them succeed academically. Numerous applicants submitted essays, but few were chosen.

Zion Williams, a ninth grader at Mount Saint Joseph High School, was one of the recipients of a Chromebook. He said that having the device will mean a lot, taking into consideration that academic instruction is being conducted virtually.

“It feels nice. I was one out of like 300 people to win so it was pretty good,” said Williams, who has plans on either playing in the NFL or being a dentist once he is out of school.

As children’s names were called, they walked up to get either their Chromebooks or Amazon FireTablets, then took a photo with Gamble.

Additionally, Matthew A. Henson Elementary and Gwynns Fall Elementary schools were the two schools selected to receive free Internet service for a year thanks to a $2,500 grant the Gamble Foundation was given from Comcast.

A total of 10 students from Gwynns Falls and Matthew Henson (20 total) will be recipients of the internet services and were selected by their school administrators based on need.

Monique Kennedy, a Comcast NBCUniversal representative, presented the Joel Gamble Foundation with a check to conclude the morning.

Margaret Powell, a retired school teacher, was in attendance to receive the internet gift on behalf of Matthew Henson Elementary and Moriah Smalls, a community schools coordinator, was there on behalf of Gwynns Falls. “We are so appreciative of the technology that we’re going to receive because there are so many students in our community that don’t have it,” said Powell, who taught at Henson for 16 years and is still heavily involved in the school community. “Sometimes parents have to make choices, whether they’re going to [invest] in technology or take care of another responsibility so this is definitely going to help families out with this gift, and we really, really appreciate it.”

Since Gamble stepped away from professional football, he has prioritized community service and engagement going on a decade. Also, Gamble is a special education teacher at Patapsco High School. He is entering his eighth with the Baltimore County Schools system.

The Joel Gamble Foundation, founded in 2014, hosts a variety of art supply and sports supply giveaways in addition to providing career opportunities and exposure, college tours, health and wellness programs, and sports camps/leagues.

Furthermore, the organization has garnered recognition for the immense contributions to the youth in Baltimore City, striving to fulfill its mission to create productive citizens in society through college readiness, academic mentorship and athletic success initiatives.