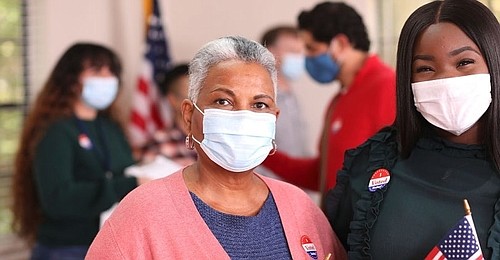 “Most importantly, people are casting their ballots earlier than ever. The window is closing, so candidates need to address concerns of 50-plus voters now,” said Nancy LeaMond, AARP EVP and Chief Advocacy and Engagement Officer. (Photo: iStockphoto / NNPA)

“This election hinges on battleground states and these results show either candidate can win,” said Nancy LeaMond, AARP EVP and Chief Advocacy and Engagement Officer. “Most importantly, people are casting their ballots earlier than ever. The window is closing, so candidates need to address concerns of 50-plus voters now.”

In Maine, Democrat Sara Gideon (44%) and incumbent Republican Senator Susan Collins (43%) within the margin of error and Independent Lisa Savage with 6%.

Due to Maine’s Ranked Choice voting, undecided voters and those who support Lisa Savage, an independent candidate, were asked a follow up about their next choice. The results found Gideon (48%) and Collins (47%) within the margin of error.

The bipartisan team of Benenson Strategy Group and GS Strategy Group conducted the surveys in Arizona, Florida, Michigan, North Carolina, Pennsylvania and Wisconsin between August 30 and September 8, 2020. The bipartisan team of Fabrizio Ward and Hart Research conducted the polls in Colorado, Georgia, Iowa, Maine and Montana between August 30 and September 5, 2020. The methodology for each survey is available here.

In August, AARP launched “Protect Voters 50+,” a comprehensive voter engagement campaign to support and protect Americans 50-plus as they vote in the 2020 elections. The campaign will help Americans over 50 vote safely, whether at home or in person. The “Protect Voters 50+” campaign will provide people with the information they need about this year’s elections, including video voters’ guides, issue briefings, direct mail, text messaging, social media and paid media.

AARP is the nation’s largest nonprofit, nonpartisan organization dedicated to empowering people 50 and older to choose how they live as they age. With a nationwide presence and nearly 38 million members, AARP strengthens communities and advocates for what matters most to families: health security, financial stability and personal fulfillment. AARP also produces the nation’s largest circulation publications: AARP The Magazine and AARP Bulletin. To learn more, visit www.aarp.org or follow @AARP and @AARPadvocates on social media.