Ravens gear up for showdown with Chiefs 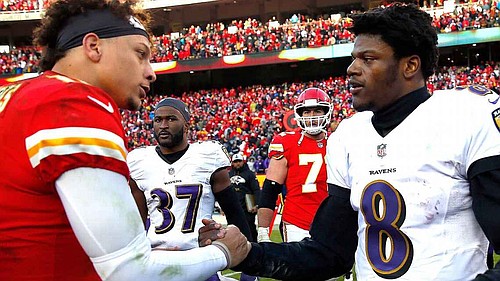 An already hot start for the Baltimore Ravens will reach an even higher level of hype as they get ready for a prime time showdown with the Kansas City Chiefs. Both teams have a 2-0 record and feature the last two players to be named MVP.

Lamar Jackson is the reigning MVP and looking to follow 2018 MVP Patrick Mahomes’ progression from top player in the league to Super Bowl champion. Jackson is already off to an excellent start, after completing 77 percent of his passes to go along with four touchdowns and zero interceptions.

Monday Night’s Chiefs vs. Ravens game will have big time implications for the playoffs since these two teams are likely to have the best record. A Ravens’ win in Baltimore this week could mean the AFC Championship will go through M&T Bank Stadium instead of Kansas City.

There is no doubt that this game is special for Harbaugh. Normally, coaches don’t get into the pregame hype, especially right after a win. That wasn’t the case for Harbaugh.

“You can’t help it, you think about it,” Harbaugh said. “It’s probably the first thing that goes into your mind once you get in the locker room. You kind of start talking about the game and then everybody is talking about it in the locker room, about the next one, too. Honestly, it’s that way every week, but Ravens gear up for showdown with Chiefs at Arrowhead Stadium. Jackson led Baltimore to 15 points in the fourth quarter but they couldn’t pull out the win.

Despite the loss, Baltimore held the top seed in the playoffs while Kansas City was the number two seed. The rematch, which would have been a dream matchup was eliminated by the Tennessee Titans when they defeated the Ravens, ending Baltimore’s 14-2 season on a sour note.

Jackson and the Ravens are on a redemption tour this year. They’ll host the Titans later. But first up to bat will be the Chiefs. Both teams stand in the way of Jackson’s ultimate goal, to win it all. That’s all that matters to him.

When asked about his past accomplishments such as winning the Heisman Trohy and having an MVP award, Jackson made it clear that the Lombardi trophy is the one he has his eyes set on.

“I’m focused on winning a bigger trophy,” Jackson said. this probably as much as any week, we’re thinking about the next one,” Harbaugh said after Baltimore’s convincing 33-16 win over the Houston Texans.

“I don’t think you can ignore it. You can’t sit there and pretend. Every game is important, they all count for wins, and you don’t want to mess up one that the fans or somebody else might not think is important. But who wouldn’t get excited for a game like this? When you’re playing a team that is the defending champs, the favorites to win the whole thing again— going forward— the type of players they have, the coaches they have? You’re going to get excited about it. It’s not something that we downplay. We don’t ignore it. We try to embrace it and make the most of it.”

The Chiefs and Ravens were on a collision course for the AFC Championship last season. They had a week 3 clash that was one for the ages when the Chiefs beat the Ravens 33-28