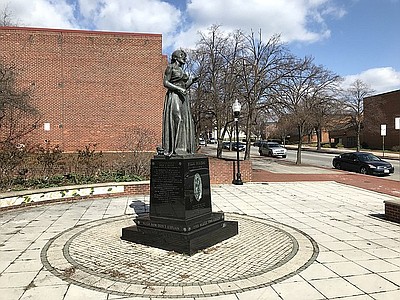 Honoring a prominent daughter of Baltimore during Black History Month would normally be cause for jubilation. However, the recent carnage on Capitol Hill resulting primarily from racist backlash against the second person of color in the White House in a dozen years, and the polarized, violent racial atmosphere permeating the country right now, makes Billie Holiday’s legacy a somber occasion in 2021.

Eighty-two years ago, Ms. Holiday released “Strange Fruit,” a highly controversial, graphic performance describing the horror of lynched, burned black bodies swaying from the boughs of Southern trees like a low hanging “strange and bitter crop” during an era when thousands of African Americans met this fate at the hands of racist white mobs.

The little-known backstory regarding Strange Fruit, and Billie Holiday’s legacy is the reaction of official Washington to the song. Written by Abel Meeropol, a Jewish-American songwriter from The Bronx, Ms. Holiday made the recording in 1939 and it instigated a virulent reaction from the Federal government.

Billie Holiday secretly became a public enemy, considered by the FBI as a dangerous subversive, and a campaign was launched to discredit and silence her by exploiting her reputation as a dabbler in drugs. Harry Anslinger, the first head of the U.S. Bureau of Narcotics, hounded Ms. Holiday for performing “Strange Fruit,” taking advantage of his authority to harass her with threats of incarceration.

In actual memos written by Anslinger at the time, he defined the song as “musical anarchy and evidence of a recurrence of the primitive impulses that lurk in black people.” He said, “It sounded like the jungles in the dead of night, unbelievably ancient indecent rites of the East Indies are resurrected” in this music by ‘black’ people. Anslinger was further quoted as saying the lives of jazzmen “reek of filth.” His pursuit of Holiday practically became a personal vendetta considered to be a main cause of her spiraling into an addiction that would eventually claim her life.

Meanwhile, back in the District, the racist mob that stormed Capitol Hill last month to ‘take back their country,’ had a hit list that apparently included influential African American congressional leaders, and their traitorous, aiding and abetting white ‘confederates,’ ostensibly with support from Republican legislators who had previously provided them surreptitious reconnaissance scouting of the Capitol’s interior layout under the guise of visitor tours.

It’s probably not a coincidence that during the Capitol Hill melee on January 6, 2021, threatening text messages were being received by a family member of fourth-in-succession behind speaker Pelosi in the Congressional leadership hierarchy, New York Rep. Hakim Jeffries, an African American and the Democratic Caucus’ Chairman.

The second in command of Capitol Hill Democrats, South Carolina’s African American Majority Whip, Rep. James Clyburn, was scratching his head on January 6 wondering how the insurrectionists knew the location of his discreetly tucked away 3rd floor Capitol Hill office. Rep. Clyburn also has an office on the first floor that he seldom uses, in a location that is easily visible and bears him name which the mob ignored. Hmm.

The historic connection between Billie Holiday’s Strange Fruit and the treasonous, Capitol Hill riot? For one, the functioning noose that insurrectionists took the time to construct on the Capitol grounds before they breached the building to hunt the “other” who were taking over their America, for the purpose of executing them.

Another parallel to the enraged white supremacist multitudes that defiled the Capitol in a murderous rage while attempting to thwart the government on the day when the peaceful transfer of presidential power was to take place, is that sans the location, this has happened before in the nation’s history, immediately following the Civil War.

The result was the formation of the Ku Klux Klan, Jim Crow and a full century of African American lynching in America that according to the Smithsonian numbers 6500 between 1865 and the Civil Rights movement of 1960s. The racist seed America sowed after the Civil War is still bearing a strange fruit in the 21st century.

Regi Taylor is West Baltimore native. The married father of four is an artist, writer and media professional specializing in political history.

Check out his meme gallery at https://www.humortimes.com/cartoons/dc -crap/.