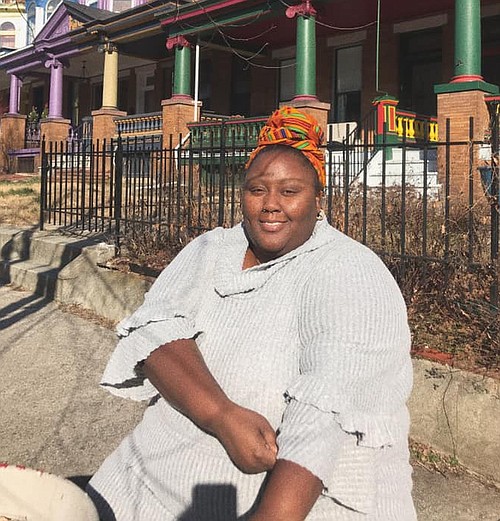 As the mother of an eight-year-old and six-year-old, Alanah Nichole Davis is still reminded of the musings of her third grade teacher, Ms. Tanya Tindall. In tough behavioral moments with her children, she often channels Ms. Tindall and declares to both herself and her children— “Act like you have some home training!” Courtesy Photo

When I was a girl I was a short, rotund and clumsy seven-year-old preparing to enter the second grade, I migrated with my family from a housing project in The Bronx, New York to what was a pretty quiet neighborhood in Randallstown, Maryland on Cervine Lane.

After we first moved to Baltimore, I completed the second-grade year Deer Park Elementary and shortly thereafter we moved to a quaint two-bedroom apartment adjacent to both Liberty and Old Court Roads— two main thoroughfares in Baltimore County. Liberty Road despite its namesake runs 44 miles and is technically a highway. Old Court Road only runs 15 miles of which my family and I took up only 800 square feet where the zoned school was and still is Winfield Elementary School, home of the Woolly Mammoth.

Every day in order to get to school, I would cross Old Court Road to get to Carlson Lane where my alma mater, Winfield Elementary still stands today. By the time we moved, I was entering the third grade where I would meet someone whose lessons still live rent-free in my head today at just a few months shy of turning 30 years old. I know now with perfect clarity that one of the most graceful, resourceful, understanding and compassionate teachers I’d set forth to have in the trajectory of schooling ever is Ms.Tanya Tindall.

Either 22 or 23 years ago in either 1999 or 2000— if my calculations are correct— Ms. Tindall from the memory of an eight or nine-year-old was a statuesque, brown woman with shoulder-length black straight hair. Having gone back after growing a few inches myself, I now know that she really wasn’t exactly physically tall but her teachings were.

There isn’t a year that goes by that I don’t think about Ms. Tindall or her poised cadence, her flawless late ‘90s and early ‘00s hair wrap styles and the lessons she would deliver out of a small classroom on Carlson Lane.

Ms. Tindall’s classic Black woman side-eye could often be seen peering through her then wire-framed glasses. At times, she didn’t even have to part her lips for the class to know we were completely out of line. Out of line was something I steered clear of both then and now. My classmates would tease me and call me a goody two shoes and they weren’t wrong— I’ve always been an ostentatiously well-behaved person even at four feet tall.

The social implications of not misbehaving or cutting up with the rest of your class at times was the occasional uncomfortable alienation from peers, and in turn, at some lunch-times when Ms. Tindall would lesson plan, she would invite me and other well behaved students to quietly sit and eat in the classroom with her instead of the cafeteria. Those lunch hours made being well behaved worth it, and besides I would surely have received an earful back at my 800 square feet apartment on Old Court Road from my mother and father when I got home, if I hadn’t behaved at school.

Ms. Tindall’s musings were many but the one will stick with me forever, “Act like you have some home training!” She would exclaim with her eyeglasses frames perched at the tip of her nose. She would say it as we walked the lightly raised silver straight lines throughout the hallways of Winfield, as she delivered lessons and sometimes randomly to keep us on our toes.

Now as a mother of an eight and six- year-old, I have Ms. Tindall’s reminders of “home training” engrained in my moral compass forever. I sit and imagine the conversations she would have with the gaggle of other Black women who served as teachers at Winfield— Ms. Jacobs; Ms. Johnson; and Ms. Barnes. Together they were not our biological mothers, not our aunts or our little friends but our teachers. I’m grateful to the muscle of empathy I’ve built for educators like Ms. Tindall who always went the extra mile, now that school is being delivered virtually for my own children.

The 2020/21 school year hasn’t always been easy with the pandemic and school being delivered at home. In tough behavioral moments, I channel Ms. Tindall and declare to both myself, and my children— “Act like you have some home training!” and it helps. Thank You, Ms. Tindall.