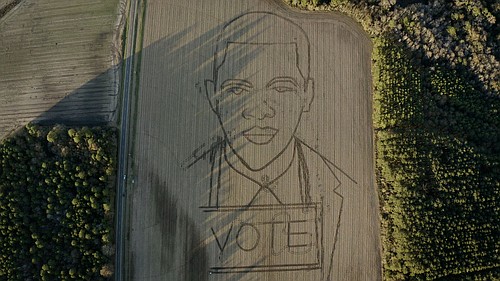 The John Lewis farm tribute was created by crop artists John Quigley and Art Tanderup in a 40-acre field on Regenerative Farmer Dan Glenn’s farm in Irwin County, Georgia. Dozens of Georgia’s diverse communities worked together through rain and shine to create the call to action. Kristian Melom/Spectral Q for /WithLove.vote

Atlanta— In a stunning poetic short, John Lewis’s words about our planet united with the imagery of his crop art portrait drawn into 40 acres of Georgia farmland.

The John Lewis farm tribute was created by crop artists John Quigley and Art Tanderup in a 40-acre field on Regenerative Farmer Dan Glenn’s farm in Irwin County, Georgia. Dozens of Georgia’s diverse communities worked together through rain and shine to create the call to action. The farm sits on the original Tribal Lands of the Muskogee Creek Nation. Chief Marian McCormick supports the message of “Vote With Love” and had the following to offer about John Lewis “I know that the Native American were truly helped by him. Mother Earth does not know about the color of our skin.” McCormick and her community have been working with Four Directions to activate the Native Vote in Georgia.

The spot was the second crop art piece from the grassroots effort #WithLove that sprung up in a push to appeal to U.S. citizens to vote. The first was what some are saying— is the largest political message ever made in the crop art battles “A Giant Message of Love,” a 50-acre aerial mural of the United States with the words UNITE, #VOTEWITHLOVE, in a farm of the swing state Wisconsin.

An additional complimentary spot “Walk Together Children” building upon Georgia’s history, spotlights Martin Luther King’s Kingstree, South Carolina speech encouraging the power of the vote. Video portraits of Atlanta citizens paint the scene of the 2021 election, shot in landmark locations such as Ebenezer Baptist Church, where Rev. Raphael Warnock served as senior pastor and Martin Luther King’s mother was shot and killed in 1974.

One dozen and counting spots, created by a consortium of independent producers and directors, including Lilakoi Moon and HUMAN., are united under the message “#VoteWithLove” for the 2020 and 2021Geo elections. The call to action is anchored in an anthem video that showcases the origins of the words in an emotional appeal from the late John Lewis.

The campaign showcases the breadth of people and personalities that make up the United States, Wisconsin and now Georgia, and range from professional athletes, farmers, youth, Indigenous Americans and a formerly incarcerated Black woman. The spots came together through the dedication of the ad makers and were created pro bono with the exception of some hard production costs.

“What we saw in November is that Georgians are powerful. We turned out in historic numbers to exercise our power at the ballot box, and we’re going to do it again, ” said New Georgia Project CEO Nse Ufot. “This poetic short and crop art project will serve as a visible reminder that our voice matters. That our vote counts.”