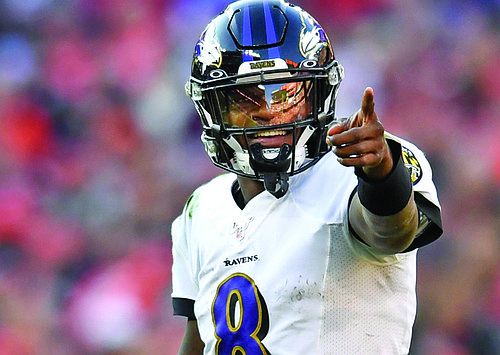 As the No. 4 seed in the AFC playoffs, the Baltimore Ravens will get a chance to revenge last season’s loss when they travel to Nissan Stadium in Nashville to face the Titans in the Wildcard round on Sunday, January 10, 2021. (Above) Baltimore Ravens quarterback Lamar Jackson. Nick Cammett/Diamond Images via Getty Images

Making the playoffs was the first goal for the Baltimore Ravens. It took a five- game winning streak, but here they are after finishing with an 11-5 record.

This team is a little different from last year’s Ravens who finished with a 13-3 record and had the top seed in the AFC playoffs. Everything went right during the regular season for the 2019 Ravens.

They won 12 straight games. Lamar Jackson lit up the NFL and was eventually named the league’s MVP. However, it was a different story once the postseason rolled around.

The Tennessee Titans came into M&T Bank Stadium and closed the curtain on Baltimore’s season with a 28-12 win in the Divisional round of the playoffs.

This year’s Ravens team is a lot different. They had to scratch and claw their way to the playoffs. “We’re excited about the opportunity. I do love the team. I love the players and the coaches. I love what we’ve been through— the adversity, even— [and] the challenges, because it forges you and it makes you who you are. So, that’s exciting, man. You’re living in the moment, and it’s an exciting thing to be in the playoffs in the National Football League,” Ravens coach John Harbaugh said.

As the No. 4 seed in the AFC playoffs, Baltimore will get a chance to revenge last season’s loss when they travel to Nissan Stadium to face the Titans in the Wildcard round.

The two teams played earlier this season in Week 11 with the Titans coming out on top 30-24 thanks to a 29-yard touchdown run by Derrick Henry in overtime. That’s two consecutive games the Ravens have lost to Tennessee.

The state of shock all of Baltimore experienced after the Divisional loss last season really stung. It put a screeching halt to what appeared to be a storybook season. In many ways, this next matchup could be considered a revenge game. However, that’s not the approach that Harbaugh is taking.

“I think we’re just focusing on the game. The previous games, really, have little bearing,” Harbaugh explained. “We’ve played them many times over the years. So, it’s kind of got some history— the rivalry does, sure. But what impact does any of that have on the next game? We just have to go out there and play our best game of the year— that’s what we’re preparing to try to do.”

Jackson isn’t focused on who the opponent is even though last year’s loss put a damper on his MVP season. He doesn’t have his eyes on revenge— moreover he’s locked in on a bigger prize.

“It’s not about them; it’s about us,” Jackson said. “It really doesn’t matter who we play. We’re going to go in there with the same mentality; just focus on our assignment and just try to come out with a ‘W.’”