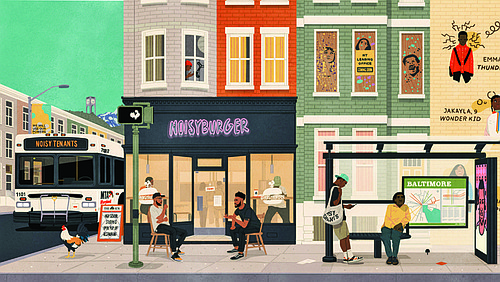 Noisy Burger first made its debut at R House, a trendy food hall in the Remington neighborhood in 2017. The then weeklong pop-up was a partnership between students in the modern culinary arts program at Mergenthaler Vocational-Technical High School and Noisy Tenants, a local firm, which offers project management, program development, and media production services founded by Nicholas Mitchel and Chris Landrum. 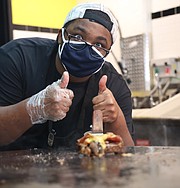 In the first pop-up edition of Noisy Burger, students developed the concept, menu, operated the restaurant, and set records for sales at R House. “I think that record still stands,” Nicholas Mitchel said.

Chris Landrum and Nicholas Mitchel are two virtuous Black men who are passionate about food, their community and the youth therein. They are self- proclaimed, “Loud Dreamers.”

When asked why they started it all, the duo respond nearly in tandem, “We want youth to be able to build a portfolio of work in order to be able to go on to the next thing— to come full circle a couple of our hires that we worked with a few years ago are already looking for opportunities and we plan to give opportunities to them since they know what we are all about already.”

“A noisy tenant is someone who dreams loud like us, someone who identifies something they want to accomplish and gets it done, they are creatives, entrepreneurs, leaders, folks who care about their community and are continually finding ways to pour life back into their own communities instead of being extractive,” Landrum said.

In the case of this definition, the dynamic duo are both “noisy” in their own right. After making the first bit of noise in Baltimore City back in the spring of 2017 when they partnered with students at Mergenthaler Vocational Technical High School or “Mervo” as it’s affectionately called where Landrum is an alumnus (Class of 2005).

Even before the challenges of 2020 and the pandemic, both men knew they were committed to working with youth again and are in the ideation phase of a program to engage youth.

“After the pop-up, we recognized the opportunity to continually make a positive impact on the youth of Baltimore and decided to re-launch the Noisy Burger brand,” Landrum said in a statement. “Our goal is to serve great food [and] to also provide opportunities for young people to gain experience in their areas of interest and contribute to their personal and professional growth.”

The youth will have an opportunity to leave their mark on the menu, marketing, branding, and even the way that Mitchel and Landrum operate Noisy Burger as a business.

“We are a family here at Noisy Burger and we want to know how to get youth where they want to go next whether its a graphic designer, social media manager or something like that we’ll be giving them responsibilities so that they can build that portfolio of work to be able to go to the next thing and that’s our superpower.” Mitchel said. “A superpower is saying we’re going to do this, whatever it is and then seeing it to completion— it’s not easy to make things real after dreaming them.”

That’s very much what Noisy Tenants, Nick Mitchel and Chris Landrum have done since opening their now permanent stall at R. House, located at 301 W 29th Street in the Remington neighborhood in Baltimore. They made their dream a reality. However, their journey to opening up a permanent stall hasn’t been void of challenges considering the global pandemic but everyone in their community stepped up to support, including: friends and family members who worked physically at the stall in its first weeks, according to Landrum.

“Tell friends to tell friends about our Classic and Noisy Burgers, complete with Noisy sauce which is a sweet, chili, barbecue based sauce secret sauce.”

The duo is open and thankful to Seawall Development, past students, the community, their spouses and they are looking forward to experimenting with veggie burgers in the future. For menu updates and schedules, follow them at Instagram.com/noisyburger/.