Mark Ingram’s impact on Ravens should not go unnoticed 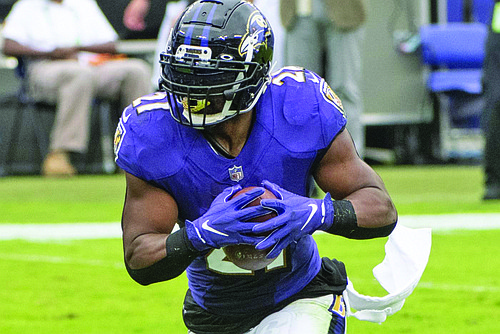 The Baltimore Ravens announced on Tuesday, January 19, 2021, that veteran running back Mark Ingram was released. The move saves the team $5 million in salary cap space.

Ravens General Manager Eric DeCosta released a statement after officially parting with Ingram. “We are making the tough business decision to terminate Mark Ingram’s contract,” DeCosta said in a statement. “Mark is a talented winner who brought passion, toughness, leadership and chemistry to the Ravens. He contributed in so many meaningful ways on and off the field, and we wish him the very best as he continues his career.”

Ingram was inactive for four of the final five games last season for the Ravens. He was also a healthy scratch in Baltimore’s loss to the Buffalo Bills in the divisional round of the playoffs.

The lack of playing time shouldn’t diminish Ingram’s impact on the team. He was a leader in the locker room and helped create the vibe that Baltimore rode to a 13-3 record last season— the best in franchise history.

The veteran was selected to the Pro Bowl after he led all Ravens running backs with 1,018 rushing yards. He carried the ball 202 times and scored 10 touchdowns.

Ingram coined the term “Big Truss,” which means trust and faith. That’s what the Ravens leaned on especially this past season when they faced adversity ranging from injuries to starters like left tackle Ronnie Stanley and defensive tackle Calais Campbell to a COVID-19 outbreak.

Through it all, the Ravens finished with an 11-5 record. However, Ingram’s 2020 season wasn’t nearly as productive. He carried the ball a career- low 72 times for 299 yards and only scored two touchdowns.

Ingram’s impact was still felt, especially for rookie running back JK Dobbins who along with Gus Edwards accounted for most of the carries for Baltimore last season.

“Mark is an unbelievable guy— a big brother to me,” Dobbins told ESPN at the end of the regular season. “He still texts me every day. He’s still happy for me every day. He actually helped me with the process, teaching me things to do to help me be mentally prepared, to stay locked in. He’s just an amazing guy.”

After his release, Ingram said goodbye to Ravens via his Twitter account. “I love the real ones in flock nation that supported me and showed luv! My blood brothers, what’s understood Ain gotta be explained. Best is still ahead, cant wait! Watch God work. #GodWins #BigTrussForever.”