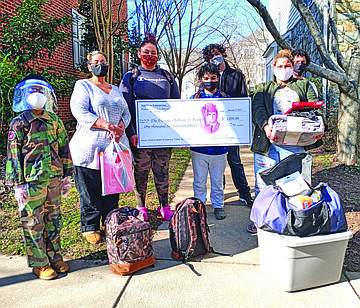 Tyler Stallings, pictured with the family of the late Francisco Beltran, Jr., who was a veteran. Tyler presented the family with a $1200.00 scholarship

Andrea Blackstone recalled the days she and her son Tyler Stallings parked at Thurgood Marshall BWI Airport. Now nine-years-old, Tyler wanted to be on Little Big Shots to discuss his humanitarian efforts to help veterans. Blackstone thought BWI was just the right place to believe his dream to be on the show would one day ‘take flight.’

Hosted by Melissa McCarthy, Little Big Shot features highly talented children. “Tyler and I had a conversation about Little Big Shots featuring kids performing, such as singing and dancing, but not do-gooders,” recalled Blackstone. “He wanted to be on the show, and even practiced giving out things to people.

“He put the clip online for Little Big Shots. I have a method of ‘speaking it into existence.’ I dressed Tyler up in a suit, straw hat and business shoes and drove out to the airport. God told me to do that, and I was obedient in what I felt.”

Tyler added, “I would point to every plane that came in and mom took a photo of it. I began to pray I would go on Little Big Shots.”

Tyler’s prayers were answered. A producer contacted Blackstone and the youngster was featured on Season 3 of the show, which was formerly hosted by Steve Harvey.

“I loved Little Big Shots, and it was my dream come true,” said Tyler. “Flying out to be on the show was my first time on a plane. I enjoyed it a lot and met other kids doing similar things. I still stay in touch with some of them.” 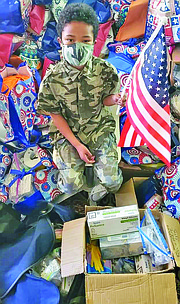 Tyler, 9, has given away thousands of his “Hero Bags” and “Hero Boxes” with toiletries, clothing and other items to thank veterans.

Tyler has a project called Give Back to Veterans. The talented youngster has helped veterans pay bills, fed those in crisis, and given away thousands of his ‘Hero Bags’ to thank them. He regularly donates to the Maryland Center for Veterans Education and Training (MCVET). The youngster’s appearance on Little Big Shots gave the organization national exposure, and some of MCVET’s veterans appeared on Little Big Shots with Tyler. Steve Harvey named Tyler as the ‘Philanthropist of Season 3,’ because of his commitment to help America’s veterans.

“Whatever God has for us, we can’t say how it is going to happen,” said Blackstone. “But if we do the work, He will put the path in place for us if we are obedient. Being on Little Big Shots was really a great experience for a child so young. I learned how our children can have dreams and they can come true, no matter how big. Sometimes we limit ourselves.”

Tyler’s appearance on the show also highlighted the issue of veteran homelessness.

“Veterans and homeless are two words that should never go together,” said Blackstone. “I feel honored and humbled that a child would inspire me and other adults to see the possibility to progress. A lot of people think that if they don’t have money or capitol, they can’t accomplish things. But this all shows the importance of doing something with what you have. We had no money, but God made a way to help these veterans.”

Recently, Tyler presented a $1200.00 scholarship to the family of the late Francisco Beltran, Jr., who was a veteran.

Greatness is in Tyler’s blood. In addition to coming from a long line American Family. Haley’s father Simon Haley is Tyler’s great-grandfather and served in World War I. 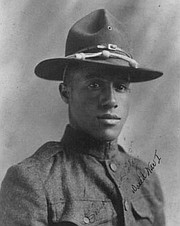 “Alex Haley is Tyler’s great-uncle,” said Blackstone. As to his own career, Tyler said he is still trying to decide if he wants to go into construction, or become a train engineer or fireman when he grows up.

“Who knows?, said Tyler. “I’m just happy and proud of how the project is going.”

To support Tyler Stallings and his Give Back to Veterans project, email kidtimeenterprises@gmail.com.of veterans, which includes his grandfather, he is a descendant of author Alex Haley, author of ROOTS: The Saga of an