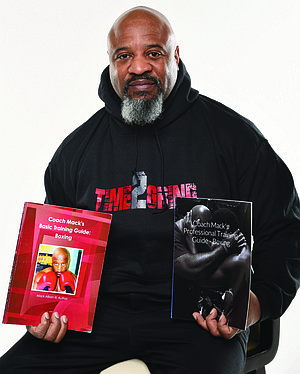 Mack Allison has authored a new book, “Coach Mack’s Professional Training Guide Boxing,” which offers advice to students, parents, and just about everyone else as they attempt to survive the coronavirus pandemic. The book is the fifth update to his 2011 guide. The 2011 installment focused on amateur boxing and provided step-by-step instruction on the Sweet Science. “Coach Mack” has trained hundreds of youths at his Time2Grind boxing gym in West Baltimore. Jerry Brown

Famous boxing coach Mack Allison, III has never considered abandoning his Baltimore roots to find greener pastures elsewhere. Known as “Coach Mack” to the hundreds of young ones he has trained at his Time2Grind boxing gym in West Baltimore, Allison had dedicated his life to helping the city’s youth.

He hopes that his new book, “Coach Mack’s Professional Training Guide – Boxing,” will offer even more assistance as students, parents, and just about everyone else attempt to survive the coronavirus pandemic.

“I’m still trying to help young people out because so many are making bad decisions when it comes to managing their money and dealing with boxing promoters,” Allison stated.

“With the book, I want to educate them so they can have an idea what to do. A lot of fighters are turning pro young, at the age of 18, these days. So, it’s important that they and their parents are educated about decision making in the world of boxing.”

Growing up in a household of eight children, Allison said family support is vital. He said his family remained “close, like Gladys Knight and the Pips.”

“My mom raised us and made sure that everyone stuck together,” Allison remarked. “In our neighborhood, you had to stick together.”

Allison, who has three children, including a son who also boxes, said young ones must have access to homegrown success stories.

“I’ve always been in Baltimore, and I’m going to stay here and help these kids,” Allison declared. “A lot of people, when they come up and do well, they want to move because they get tired of the city and they want to leave. I am not knocking them because everyone has their own reasons, but I just prefer to hang in there and try to make a difference. I once was one of those kids who sat on his steps and [dreamed] about making it. I didn’t want to become another statistic.”

In his book, Mack offers a realization that he hopes others acknowledge about many Baltimore youth.

“Some of these young people are out there trying to survive, and they don’t have much of choice,” Mack stated.

“I want to create an avenue to give them a choice, a chance. I want to say at least that I tried.”

“Coach Mack’s Professional Training Guide – Boxing” is not Allison’s first attempt at being an author. It is the fifth update to his 2011 guide. The 2011 installment focused on amateur boxing and provided step-by-step instruction on the Sweet Science.

In 2012, Allison wrote extensively about the sport’s business side, including information about what to look for in professional contracts.

“You have to be aware of what goes on in the business of pro boxing,” Allison said. “It is a cutthroat business.”

Allison said he hopes that gym owners and trainers around the city – if not the country – will purchase the books and distribute them to young ones. “A lot of young ones want to box. This book will give them an idea of what’s going on with boxing. We plan to really try and help the young ones in Baltimore and the county, especially when we are able to open up again safely.”