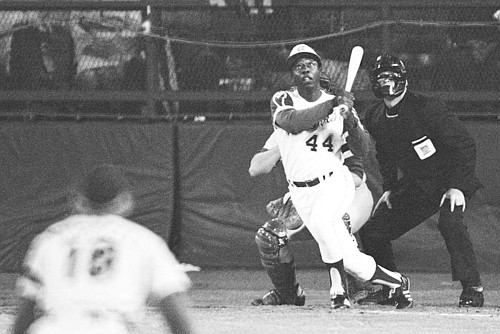 Aaron eyes the flight of the ball as he hit his record-breaking 715th home run on April 8, 1974. The historic moment happened in Atlanta against Los Angeles Dodgers pitcher Al Downing. Harry Harris/AP

(CNN) — Baseball legend Hank Aaron is remembered today as one of the greatest to ever play the game. Crucial to his legacy is that unlike his White counterparts, he pulled off his most significant achievements while enduring pervasive racism.

Throughout his career, Aaron experienced hate and vitriol on and off the field for the simple fact that he was an African American.

Aaron dominated baseball at a time when part of the nation still upheld Jim Crow, a system of racial apartheid in the American South. Even after legal segregation ended, baseball fans engaged in ugly and vile tactics to remind him of what they considered to be his place in the nation’s racial hierarchy.

In spite of all those obstacles, Aaron persevered — breaking the career home run record previously set by Babe Ruth and other records that he still holds to this day. He passed away on Friday at the age of 86. Here’s a look at the racial barriers Aaron broke, and the legacy he leaves behind. He faced racism on and off the field Aaron was born in 1934 and grew up in and around Mobile, Alabama.

Civil rights leader Andrew Young, who said he and Aaron shared a close friendship since 1965, told CNN that the racism Aaron experienced began in childhood.

Aaron’s mother would summon him from the baseball field to come home and hide under the bed because the Ku Klux Klan was riding through the neighborhood, Young said. But he was never deterred, going right back outside to finish playing when the Klan left. Inspired by his idol Jackie Robinson, the first African American to play Major League Baseball in the modern era, Aaron completed brief stints in the Negro American League and the minor leagues before making his way to Major League Baseball.

During his time in the minor leagues, Aaron was met with racism both inside and outside the stadium. In Jacksonville, Florida, fans threw rocks, wore mops on their heads to mock Black players and threw black cats onto the field.

When the team traveled around the South, Aaron would often find himself separated from his White teammates, left to make his own food and lodging accommodations.

But Aaron pressed on, and his success ultimately landed him in his first major league game with the Milwaukee Braves in 1954. Over the next two decades, he would cement his status as a baseball icon. He was named MVP, received several Gold Glove awards, broke numerous records and led the Braves to win the World Series in 1957.

His accomplishments were met with hatred As Aaron began to close in on Babe Ruth’s career home run record in the early 1970s, the racists came out in full force. White baseball fans responded to the prospect of Aaron overtaking Ruth’s record with letters containing racial slurs, hateful comments and even death threats. “Everybody loved Babe Ruth,” one of the letters read. “You will be the most hated man in this country if you break his career home run record.”

“How about some sickle cell anemia, Hank?” read another. That Aaron would dare to surpass the record set by Ruth, who was White, rankled many White fans of the game. In 1973, Aaron received more than 930,000 pieces of mail — the most by anyone excluding the country’s politicians, Lew Freedman wrote in the book “African American Pioneers of Baseball: A Biographical Encyclopedia.”

Though some of the mail was positive, the threats Aaron received were so serious that the FBI launched an investigation into them.

“In some of the letters, these people described how they would kill him,” the late Pellom McDaniels III, curator of African American collections at Emory University’s library, said in a 2014 news release. “I thought it was audacious; some people signed their names and provided return addresses, as if it were acceptable to say these hateful things without fear of any repercussions.”

The racism and death threats “rolled off his back like water off a duck’s back,” Young said.

“It says a lot about the way his mother and father raised him,” Young, who visited Aaron’s family in Atlanta on Friday morning, told CNN. “He was a child of the South, he was a child of racism, but he never let it bother him publicly. He never let it slow him down or change his focus in life.”

Instead, the hate that came his way only motivated Aaron to work harder toward his goal.

“I kept feeling more and more strongly that I had to break the record not only for myself and for Jackie Robinson and for black people,” Aaron wrote in his autobiography. “But also to strike back at the vicious little people who wanted to keep me from doing it. All that hatred left a deep scar on me.”

On April 8, 1974, Aaron hit his 715th home run at Atlanta-Fulton County Stadium finally breaking the career record held by Ruth. It was a historic moment for Atlanta, for baseball and for American history.

His legacy extends well beyond baseball Aaron ended his legendary playing career in 1976 with a total of 755 home runs.

“Retiring as the last Major League player to have played in the Negro Leagues, Aaron’s career can be seen as a symbolic bridge from the dark days of segregation to an era of greater opportunity,” National Urban League President and CEO Marc H. Morial said in a statement.

Aaron continued to speak out against racism in the sport after retirement, remaining engaged in community advocacy and the fight for civil rights.

“Maybe the day will come when I can sit back and be content with the changes that have taken place in America, or, at least in my part of it, which is baseball,” he mused at one point.

Aaron served on the NAACP board and also founded the Chasing the Dream Foundation, which funded programs that helped underserved youth develop their talents and pursue their dreams.

In 2002, Aaron was awarded the Presidential Medal of Freedom for his humanitarian efforts. The NAACP Legal Defense Fund presented him with the Thurgood Marshall Lifetime Achievement Award in 2005, and established the Hank Aaron Humanitarian in Sports Award in his honor.

In his final days, Aaron received the Covid-19 vaccine as part of a campaign to encourage other African Americans to be immunized.

NAACP President Derrick Johnson said Aaron will be remembered for overcoming racial barriers, not only in baseball but also the civil rights movement.

“I would hope athletes from all sports will look at his legacy as an example of how to use their platforms for social good and to advance the causes of civil rights,” Johnson said.

“He’s an example of how to overcome adversity, but he is also an example of the many people who are confronted with barriers today that shouldn’t be there.”